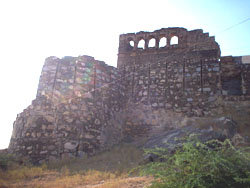 Bhuragrah Fort is situated at the bank of Ken river. Seeing the sunset from fort is a beautiful experience. The historical importance of Bhuragarh Fort is related to Bundela reign and Hridaya Shah and Jagat Rai, sons of Maharaja Chattrasal. Kirat Singh, son of Jagat Rai, mended Bhuragarh Fort in 1746 A.D. Arjun Singh was the caretaker of the fort.

In 1787 A.D., Nawab Ali Bahadur I started looking after the domain Banda. He fought a war against Arjun Singh in 1792 A.D.  Then it came under Nawab's rule for some time but Rajaram Dauwa and Laxman Dauwa won it again from Nawabs. After the death of Arjun Singh, Nawab Ali Bahudar took the control of Bhuragarh Fort. Nawab died in 1802 A.D. and Gaurihar Maharaj took the administration after him. 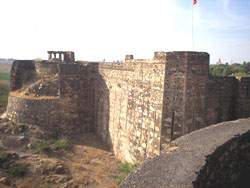 On 8th June 1859, many revolutionaries were arrested and sentenced to death and life imprisonment.

Shri Rao Mahipat Singh of Sungara State with his 80 officers were hanged in this fort. 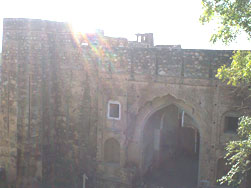 From May 1858 till the independence of India, fort remained under British Rule. Due to cold eye of Indian Tourism and Archeological authorties, the fort reached the brink of destruction. The basement and lower floors vanished under dirt and garbage. However, with grace of Tourism Development Scheme 2005-06, about 1.6 Million rupees were issued to the authorities for fort. A park, boundary wall, Martyr Memorial etc. has been constructed with this money. But no work has been done for storing and restoring the architecture and design of historical importance. 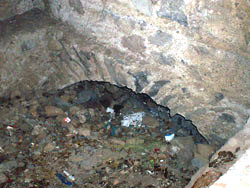 Bhuragarh Fort is not just a piece of architecture or history which is about to collapse.  It is a symbol of sacrifice, patriotism, sovereignty and equality. It is the witness of struggle where people from different sects, races, communities, religions came together rubbing shoulders with each other and fought against foreign rulers.  It is the ground of great incident which made Banda as the first town in India to achieve freedom from British Rule. Its the mirror of our glorious past. Its pride of Banda.

plz give m more description about deewan of riyasat banda and vilayat hussain....kindly and plz snd m the detail on my email id....thank u