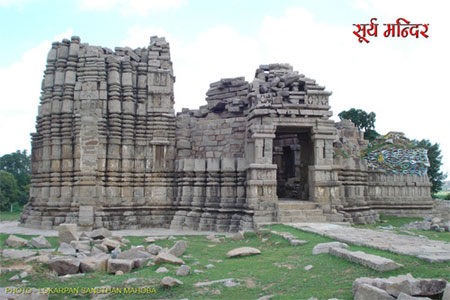 Also popularly known as The City of Lakes, it lies about 145 km east of Jhansi. It is associated with the Chandela kings who ruled over Bundelkhand between the 9th and the 12th century. At Mahoba, the impregnable hilltop fort and the lakes they created are considered to be engineering feats. The wonderful water management system of the Chandela period can still be seen here. Mahoba was also a prominent cultural centre. Ballads praise its days of glory and narrate the inspiring saga of Alha and Udal, the two legendary warrior brothers who sacrificed their lives for the honour of their land. There are many places of historical and archaeological interest, besides the numerous lakes that dot the rocky islets. Among the many temples are some Jain shrines, built around the 12th century A.D.

This 9th century granite temple lies to the west of Rahila Sagar, an artificial lake credited to Chandela ruler Rahila, who ruled between 890 to 910 A.D. Though in a ruined state today, the temple is a fine example of early Pratihara architecture in the area.

This temple dedicated to the tutelary deity of the chandelas, stands on the bank of Madan Sagar, near the fort. In front of it is a monolithic granite pillar, 18 ft. high and 1.75 ft. wide at the base.

Situated on Chhatarpur Road, it is a branch of N.B.R.I., Lucknow. Here one can see betel farming in its various stages.

Temples and other monuments

Near Madan Sagar is the famous granite Shiva temple known as Kakramath, built in the Khajuraho style of temple architecture. The Madan Temple dedicated to Vishnu also stands nearby. On an island in the lake stands Majhari, the ruins of another Vishnu temple. Along the northern embankment is an old Chandela fort known as Qila Mismar along with the ruins of ParmaI's Palace. The celebrated Maniya Devi Temple, the massive stone pillar known as Deewat or Alha-ki-Gilli and the Dargah of Pir Mubarak Shah the tomb of a Muslim saint from Arabia, who settled in Mahoba in 1252 AD, also stand in the fort area.

A roofless, granite-pillared baradari, known as Alha's Baithak, stands on the south-east end of the embankment. A tunnel nearby is said to lead to the fort by the side of Madan Sagar. Near the southern end of Madan Sagar are located the temple of Bari Chandrika Devi, the Shiva cave temple of Katheshwar and on the adjoining hillock, 24 rock hewn images of Jain Tirthankaras.

A Sun Temple, among the rare few still to be found in northern India, is located at Rahila Sagar. Though in a ruined state, it is still an excellent example of Chandela architecture.

Besides the tanks, Mahoba has two famous Chandela period kunds (pools) lined with granite slabs in a reverse pyramid shape. Ram Kund is located to the west of Madan Sagar, while Suraj Kund is near Rahila Sagar. Both originally served as ha van kunds (pits for sacrificial fires) for the great yajnas performed by the mighty Chandela rulers.

The hill where Guru Gorakhnath resided with his disciple Sidho Dipak Nath is drama tic with massive granite rocks, perched atop one another in a wild and striking manner. A huge, carved Gajantak Shiva figure in the foothills can also be seen. The spot is ideal for picnics and climbing excursions.

20 km. from Mahoba on N.H. 86, Charkhari is noted for Mangal Garh Fort on the Mulia Hills. Guman Bihari Temple, Govardhan Temple and lakes which form a unique sceinc water body. The erstwhile Maharaj’s palace is a heritage home stay. Contact: 05283-266138. Govardhan Mela, celebrated during the month of Kartik, Oct./Nov. draws a large number of devotees from far and near.

Rail : Mahoba is well connected on the Central Railway.