A ground report reveals the rural landless poor are struggling to find work, and cutting down on staple food items.

CHITRAKOOT/PANNA : It is well past 2 in the afternoon, but the wall clock hanging in Seema’s bare room is stuck at 10.15am. But that is not the reason why this mother of a month-old child, is yet to have a morsel of food. A meal—rotis or wheat flatbread, and a deep red and watery curry with potatoes floating in it—has been cooked. But Seema is waiting for her husband to get back home. By eating late, she will “save" a meal. That will help buy some milk for her other child, a two-year-old girl.

The thatched roof of the single-room mud house in Dafai, a village in Chitrakoot district of Uttar Pradesh, is pockmarked with holes. Seema’s husband Sanjay, a graduate, works as a casual worker in and around the village. But it has been difficult to find work of late. At times Sanjay earns just ₹100 a day working as a porter or a construction labourer; on most days even that paltry sum eludes him. Therefore, the family’s spending on food was cut drastically. 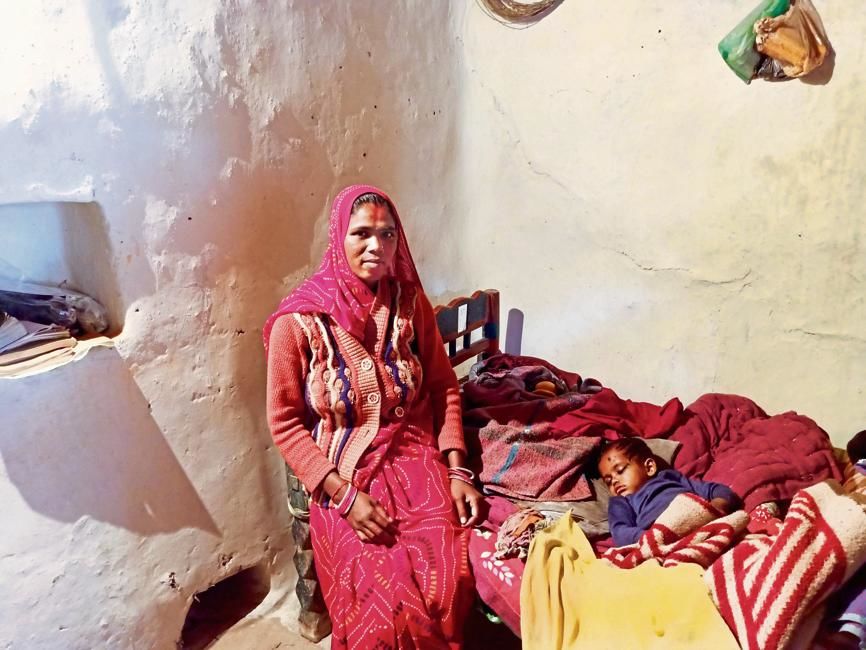 Seema, a young mother from Chitrakoot, skips meals to save and purchase milk for her two-year-old daughter.

Seema’s two-year-old daughter has a diet of rotis with salt. The girl is yet to bite into fruit, any fruit. Staples like pulses are cooked rarely and the family seldom buys vegetables other than potatoes or tomatoes. “My life now revolves around paanch rupiya ka tel aur du rupiya ka masala ( ₹5 worth of oil and ₹2 worth of spices)," said Seema.

Last week, as the winter crept into the arid Bundelkhand region spread across the states of Uttar Pradesh and Madhya Pradesh, Mint travelled to three districts, Chitrakoot, Banda and Panna.

And the ground reality of a lactating mother like Seema starving herself to save on a meal is ironic and sad—the central government’s foodgrain stocks are overflowing (an excess of 30 million tonnes over buffer norms) but there is little effort on its part to extend the food safety net.

Seema’s family is excluded from the subsidized food scheme that guarantees a modest 5kg of grain per person per month under the National Food Security Act, 2013. In Dafai there has been no survey since 2016 to include new beneficiaries. Newly married women and young children have been left out, pushing families to the brink of starvation. 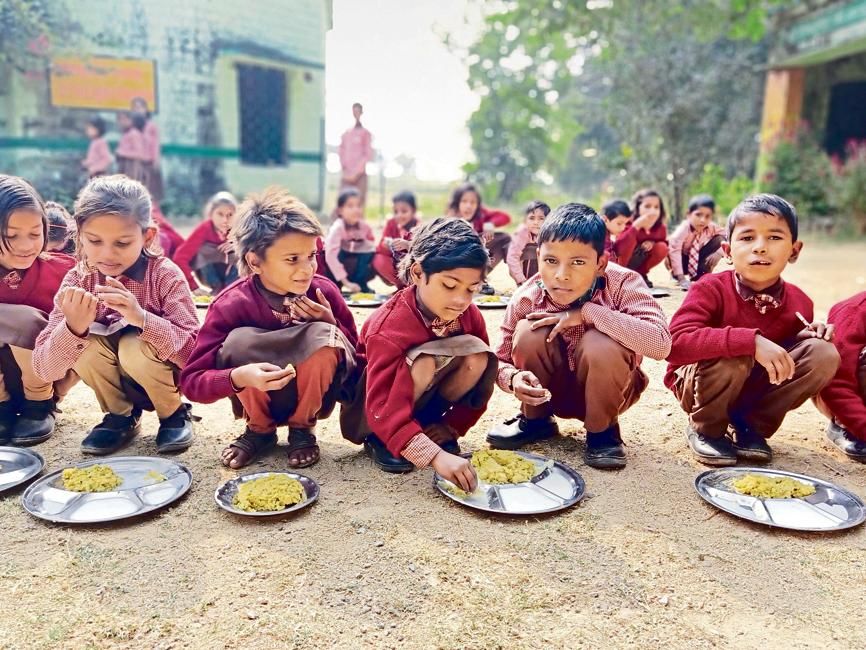 The situation is made worse by inadequate supplementary nutrition schemes offered in centrally funded Anganwadis (child care centres) and pilferage in midday meals for school children. The latest spike in retail food inflation driven by a rise in prices of vegetables, onions and milk —a 10% increase year-on-year in November—hasn’t helped matters, pushing families to the brink. Seema wanted to study but was married off; now she is unsure if her children will ever step into a school.

Chickpeas to the rescue

In the face of twin adversities—falling incomes and rising food prices—the landless poor in rural India have fine-tuned their food choices. In Bundelkhand, a common sight today is women plucking tender chickpea leaves from the field, the only greens in their diet. The winter crop in its infancy is a nutritious addition to the chilli-roti-salt diet of households—it’s not rare to spot a child chewing on uncooked chickpea leaves or an elderly woman relishing it with green chillies.

It is this chana saag, along with subsidized food from the public distribution system (PDS), that is saving many from acute hunger. 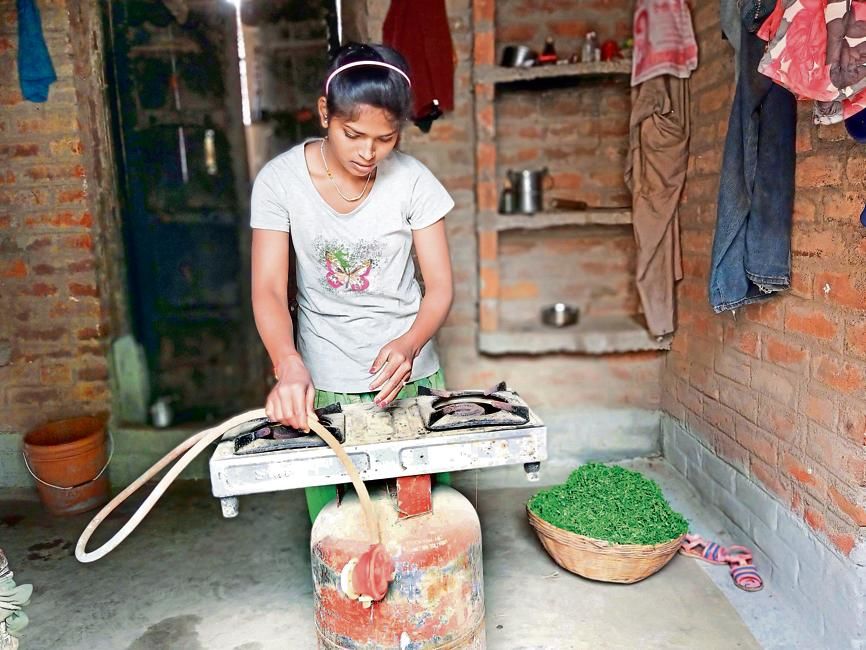 Rajni, 16, said her family is too poor to refill the gas cylinders that were distributed for free under the Prime Minister’s Ujjwala Yojana

Take for instance Genda Bai, a woman in her mid-30s who lives in a remote tribal hamlet named Jamunehai in Madhya Pradesh’s Panna district, which is famous for its diamond mines. Around 3.30pm when this correspondent reached her mud-plastered courtyard, she was eating the first meal of the day with her daughter, 9-year-old Shish Kumari. On the plate was boiled rice cooked with turmeric and salt. Forget pulses, there was not even potato or tomato.

On my request Genda Bai spread out the grocery items from the kitchen. All she had was a kg of rice, a bag of wheat, a few shrivelled green chillies, one tomato, two small-sized onions, a pack of coriander seeds and 200 ml of mustard oil. The children in her house had never tasted milk. 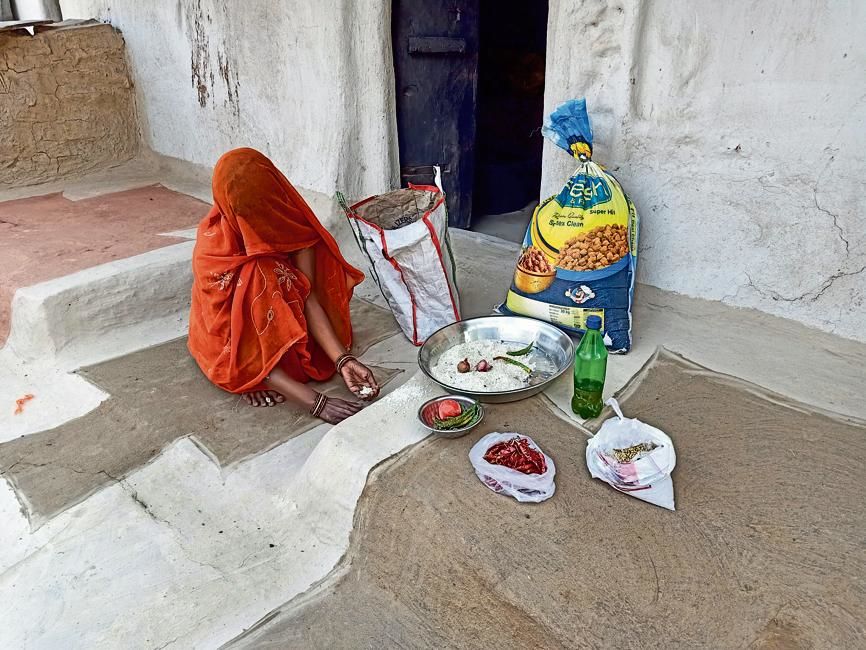 Genda Bai, a tribal woman from Panna in Madhya Pradesh, displays her entire stock of groceries

What’s for dinner? “I will cook only if we are hungry," she replied. The wheat and rice she gets from PDS lasts not more than a week. So every morsel is to be saved. Her husband, who has not found work in more than a week, was in the forest, collecting wood; a head-load will sell for ₹50 in a nearby market. When asked what she may purchase if she had ₹500, Genda Bai stubbornly refused to answer. It is pointless to dream about food when you have no money, she said.

No jobs for the asking

In their struggle to put food on the plate, families in this village have stretched themselves thin. Most send the elderly and children to look after crop fields of upper-caste landlords. The wheat and mustard crop need protection from wild animals and stray cattle till it is harvested. For this 24/7 work spanning five months, families are paid in kind—about 200kg of wheat or ₹4,000. This translates to a wage of ₹27 for every 24 hours of work. This poorly paid job is reserved for the elderly and children. But this also means no child in the village goes to school, missing out on even the meagre midday meals.

Amid the ongoing jobs crisis, the rural employment guarantee scheme failed to keep up to its promise—till date about 1.77 billion man-days of work was generated under the scheme in 2019-20 (April to December), far short of the 2.68 billion man-days in 2018-19.

In the three districts that Mint travelled to, the complaints were similar: too few days of work on offer and wage payments delayed by more than a month.

At 12.30 in the afternoon last Tuesday, the children in Pathroudi Primary School in Chitrakoot were having a mock fight with their plates. It is time for the midday meal. The day’s menu, painted on the walls outside the school kitchen, states they will be served pulses cooked with vegetables along with steamed rice.

The rice is ready but the lentils are a sight to behold. It looked more like watery gruel with a few strands of spinach thrown in. On a child’s plate it emerged as an island of rice floating on a green lake. As children fiddled with the food, a teacher urged them to drink it up.

Under the centrally sponsored Mid-Day Meal Scheme, children from Class I to Class V are entitled to vegetables and pulses worth ₹4.50 per day, in addition to rice and wheat that is supplied from PDS, fuel for cooking and monthly payments for cooks. The day Mint visited this school, 49 children were present.

The pulses—that are served with rice— were cooked with just 250 grams of greens and half a kg of pigeon peas. Clearly, a fraction of the sanctioned amount has been spent by the school teachers and village local bodies who oversee implementation of the scheme. The experience was no different in all the three schools that Mint visited in Bundelkhand. “There is hardly any monitoring of the Mid-Day Meal Scheme or problems faced by families while accessing subsidized food grains," said Raja Bhaiya, who heads a local non-profit Vidya Dham Samiti.

The use of technology like Aadhaar— introduced to reduce corruption and pilferage—has meant additional hardship for families. Around 12 noon on 11 December, the subsidized PDS shop at Parmai village in Uttar Pradesh’s Banda district was teeming with people. They were waiting for electricity supply to be restored so that the biometric authentication machines could work. 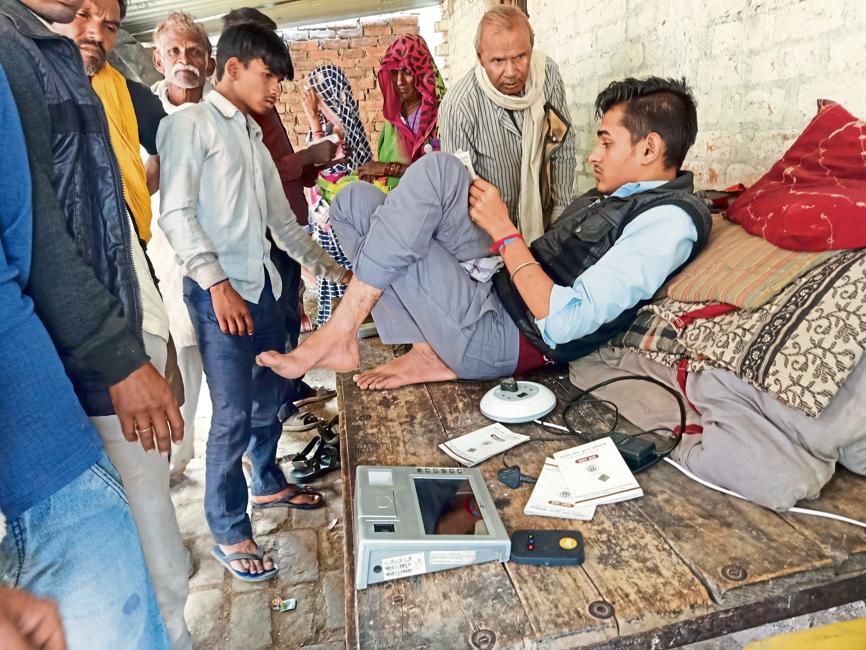 Women and elderly who were waiting complained that Aadhaar-based authentication failures are common. Worn out by daily labour, their fingerprints do not match easily; the internet is painfully slow; and they are forced to make two-three trips to collect a month’s quota of ration, waiting for hours on end every time they visit.

Soon enough there was a brawl, with some pushing and shoving thrown in. A young man shouted at the shop owner, complaining that his 70-year-old mother had to repeatedly visit and some family members’ names were deleted from the system without a reason. This seems to be a common problem. Many households complained their names were dropped from the beneficiary list arbitrarily. They were asked to enrol again online, then visit the block headquarters to get an approval—a process which takes more than three months.

Then, there’s the most common form of corruption, which is providing families less than their entitlement—19kg of grains, say, when they are entitled to 20kg every month.

For those in the queue, the biometric authentication test is no less than clearing an exam. There is relief on their faces when they pass the test. Failure means going back to the end of the queue again. Authentication failures reach up to 20% on some days, said the PDS shop owner Rajendra Kumar. “We have been strictly instructed not to provide rations if authentication fails, otherwise the licence will be cancelled," he added.

Half an hour’s ride from Parmai, a middle- aged Budhiya was not in a state to talk about any of this. She sat in a corner of her open kitchen, draped in a white sari, her face hidden behind a veil. Two days back, her husband, a casual worker, committed suicide while she was away with her children. There was neither food nor money at home.

Her children, a girl and a boy in their early teens, did not speak a word. Perched by the roadside, they sat with steely faces. They seemed prepared for a future that will be no better than their parents’.