NGT directs UP Govt to stop sand mining in Bundelkhand 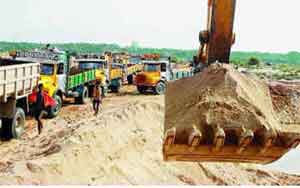 A bench headed by Justice U D Salvi issued notices to Ministry of Environment and Forests (MoEF), Uttar Pradesh government, state pollution control board and others, seeking their responses by October 14.

"We have before us photographs of sand mining going on in two villages of district Jalaun being carried out on river Betwa. These photos were taken in last week of August, 2015. Admittedly, sand mining should not be carried out during the monsoon period....

"We direct District Magistrate and Superintendant of Police of Jalaun district, Uttar Pradesh to take measures and ensure no illegal sand mining goes on in the area and due action is taken against the violators in accordance with the law," a bench headed by Justice U D Salvi said.

The direction came during the hearing of a plea by NGO Jan Sashaktikaran, represented through advocate Rahul Choudhary, seeking action against the alleged sand mining on the river Betwa being carried out in violation to the laws.

The NGO also filed photographs showing illegal mining in the middle of the river using machines in last week of August.

"Even after clear directions by this Tribunal to Deputy Commissioner, Superintendent of Police and Mining Authorities to ensure compliance of order on sand mining... no effective step has been taken by the concerned respondents.