Galli Galli Sim Sim, the Indian version of world-renowned educational children’s series Sesame Street, in association with theRadio Bundelkhand 90.4 (Apna radio Apni batein) undertook an initiative to create awareness about the importance of nutrition through a community programme on healthy eating at Rani Laxmi Bai Public School in Parpatpura. On the occasion parents were taken through a practical demonstration on how to prepare nutritious food through easily available items.Child specialists, Dr. Anandani and Dr. S N Tiwari, were guests of honour on this occasion.

This programme is a part of the Galli Galli Sim Sim radiophone initiative that is supported by Schwab Charitable Fund and aims to address the educational needs of disenfranchised children through a convergence of technologies. It is through this radiophone project that Galli Galli Sim Sim is now increasing its impact and reaches to families in North and Central India.

The idea behind the programme was to educate the community on food and nutrition. Participants included Radio reporters, Anganwadi workers and children along with their parents. The programme commenced with the play out of the Galli Galli Sim Sim episode - ‘Cow no Milk’ after which children were quizzed about the importance of drinking milk. The Radio Bundhelkhand RJ Varsha then spoke about Galli Galli Sim Sim and the importance of eating nutritious food to stay healthy. This was followed by a demonstration on how to sprout lentils and make a nutritious and tasty salad with them.

Child specialists, Dr. Anandani and Dr. S N Tiwari spent time with the parents and informed them about important nutrients found in common fruits and vegetables and how seasonal fruits and vegetables benefit children. They also spoke about different ways in which vegetables can be cooked so that children eat them easily. Ms. Vandana Srivastav, a nutrition expert, spoke about the importance of a balanced meal to stay healthy. The programme ended with children eating a freshly made fruit salad to encourage them to eat healthy.

Commenting on the program, Sashwati Banerjee of Sesame Workshop India the creators of Galli Galli Sim Sim, said, " Galli Galli Sim Sim is building an innovative and sustainable model that can be replicated to bring quality early learning experiences to disadvantaged children across India. Through our initiative we also aim to create awareness among the community– roles and responsibilities of various institutions, right of the child and that of a parent. This way the children not only learn but also apply what was taught to them."

This unique initiative of Galli Galli Sim Sim Radiophone taking education to every corner of India kicked off last year with Gurgaon ki Awaaz, Gurgaon’s popular community radio station. The program which commenced with a focus on delivering key health and educational messages to children and parents also provides community members with a platform to take up the most critical issues in their town/city. Now the project is reaching over 1.4 million people in partnership with 10 community radio stations in North India and Central India – Chamba & Supi (Uttarakhand), Lalitpur (U.P), Solan (H.P), Mewat, Ghaghas & Gurgaon (Haryana), and Orcha & Shivpuri (M.P).

The Schwab Charitable Fund was established in 1999 as a donor advised fund to encourage strategic charitable giving. Schwab Charitable is amongst the largest fund raising charities in the United States and a leading national donor advised fund. The charitable organization has raised over 5 billion dollars for philanthropy and has facilitated more than 2 billion dollars in grants for charitable causes. Schwab has developed a strategic approach to philanthropy so as to help donors of all sizes to frame, develop and fulfil their charitable goals

Radio Bundelkhand (Fm 90.4), Apna Radio, Apni Baatein was launched on October23, 2008 at the Appropriate Technology Centre of Development Alternatives at TARAgram, Orchha by Srimati Prabha Devi, a member of a Self Help Group from Sitapur Village. For over a year the community radio has been jointly managed and produced by the communities living in the area around Orchha in Tikamgarh District, Madhya Pradesh.

One of the poorest and backward regions, in the country, Bundelkhand in Central India is a drought-prone with limited natural resources, severe water scarcity, improper land planning and management, poor industrial development, limited livelihood options, gender discrimination and poor economic growth. The purpose, as identified with the help of our communities in the radius of the radio station is to work with them to use this communication medium so as to create awareness, extend information, participate in local self governance and provide entertainment - all based on requests and feedback from the community. The listeners include the communities in the radius of the broadcast range, with special attention to women, youth and the marginalized groups. Radio Bundelkhand 90.4 Mhz. went on air on October 23, 2008 and from that day onwards it has been airing local programmes for four hours every day. This is the first community radio licensed in Madhya Pradesh state in Central India. 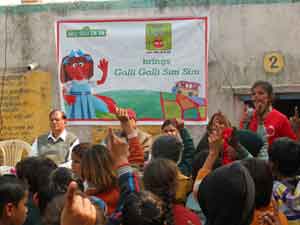 Galli Galli Sim Sim (GGSS) is a multi platform educational initiative by Sesame Workshop India, for children aged 0-8 years and their caregivers. GGSS is based on a whole child curriculum comprising of five key areas of early childhood development – cognitive learning, social, emotional and physical development and cultural diversity. GGSS’s mission is to create innovative, engaging content that maximizes the educational power of media to help all children understand and work towards fulfilling their highest potential. The goal is to improve the quality of early childhood educational inputs for Indian children.

One pillar of this project is the Galli Galli Sim Sim television show that has been airing on two of India’s leading television channels: POGO and Cartoon Network. The television show is complemented by an educational outreach by Sesame Workshop India whose primary target age is early childhood (0-8 yrs) with a focus on preschool age children (2-5 yrs) but also ranging up to 12 yrs in some cases. In conjunction with their work focusing on children, they also recognize the important role of parents and usually target them with materials and communication. In addition, they seek to increase the profile and value of early childhood education among community members and the general public. Over the past two years, SWI has distributed educational materials to over 6,500 preschools in 8 languages in 6 large metro cities in India, reaching over 2,00,000 children and their caregivers. Galli Galli Sim Sim facilitates young Indian children’s basic academic skills as well as life skills, while celebrating India’s rich cultural diversity, in order to promote their overall learning, health, and development.