The dance festival was staged in the backdrop of the famous temples of archaeological excellence, the Vishwanatha temple and Chitragupta temple. 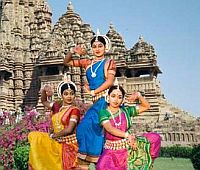 The event, which is aimed to promote cultural heritage and traditional dances of India, saw artistes from India and abroad perform traditional Indian dances like Kathak, Kuchipudi, Odissi, Bharatnatyam, Manipuri and Mohniattam.

“I hope to be able to spread this Odissi dance, which is a wonderful art form. I want to spread it as far as possible. This dance is something, which has to be understood and explained to the people. People need to relate to it. But it is so powerful and graceful. I am sure Odissi dance will have a big future, a great future,” said Ileana Seta Risti, an Italian artiste.

The spectacular background of the exquisite sculptures of Khajuraho engraved on the temple walls enhances the magnificence to the festival.

“I like the surroundings in front of the temple. And I like people, the audience who are familiar with this art and have respect for this art form. I am really happy to perform in front of them,” said Asha, a Bharatnatyam dancer from Poland.

The festival was started by the Madhya Pradesh Government in 1975 and now entices the whole world.