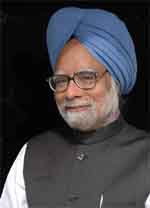 The long-awaited “Bundelkhand package”, which has been described as the Congress Party's ploy to score political points over the Mayawati Government, is expected to be announced when Prime Minister Manmohan Singh addresses a rally in Banda on April 30.

The rally will also be addressed by Congress general secretary Rahul Gandhi.

The Banda rally in the backward Bundelkhand region of Uttar Pradesh is one of the four big rallies planned by the Congress in all four regions of the State.

Congress general secretary in charge of UP Digvijay Singh said on Thursday that the Bundelkhand package would be explained at the rally.

He said another rally would be held in Basti on April 24, but the Prime Minister and Mr. Gandhi will be present only in Banda.

Since Mr. Gandhi's forays in the backward region of the State in 2008, Bundelkhand had become a political battlefield for the Congress and the Bahujan Samaj Party.

Chief Minister Mayawati had in July 2007 (a couple of months after assuming power) demanded a Rs.80,000 crore special incentive package for development of Bundelkhand and Purvanchal (eastern UP).

The Centre so far has not responded to the Chief Minister's demand.