(News) Rahul Gandhi will attend congress' next rally in Banda 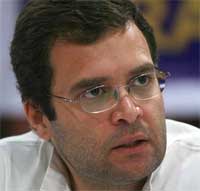 Rahul Gandhi will grace the party's next rally in Banda

Prime minister Manmohan Singh and Congress general secretary Rahul Gandhi will grace the party's next rally in Banda. The back of the beyond district in impoverished Bundelkhand belt is in headlines after a local BSP MLA Purushottam Naresh Dwivedi was accused of raping a minor girl.

Although there is no date fixed for the rally, it is likely to take place within 15 days. "We were planning a rally in January for long," said UPCC president Rita Bahuguna Joshi, adding "the party has zeroed in on Banda as it is easily one of the most neglected pockets in Bundelkhand. The Neelu (rape victim) factor is only coincidental."

And even as Congress leaders tried hard to to play it down, the choice of the place, observes feel, could be a calculated strategy to strike while the iron is hot. Neelu (name change) case has grown into a major controversy. Chief minister Mayawati and high court's order to release the girl from prison where she spent 33 days for a petty theft after suffering the sexual assault by MLA and his goons, could only be the beginning of a prolonged drama. Political parties are desperately trying to outdo each other to encash the tragedy and Congress would do its best to lead the pack, sources said.

So, on Monday a high-level delegation of UPCC bosses petitioned the governor to beef up the security cover of the Banda MLA Vivek Singh who played a major role in exposing the dubious role of the Banda police chief. On Tuesday, it dispatched a cheque for Rs 2 lakh to the girl with a promise of more financial help from the party president Sonia Gandhi. Neelu could be given a substantial amount during the Banda rally by the PM or Rahul, party sources hinted. Apart from rattling the ruling party, it could also vide the party with a perfect launching pad for the election 2012.