(NEWS) She can join the Gulabi Gang - "Fight not yet over"

She can join the Gulabi Gang - "Fight not yet over"

Taking up the cudgels for the minor dalit girl, allegedly raped by a BSP MLA, a group of pink-sari clad women who have been holding demonstrations under the banner of "Gulabi Gang" to highlight her plight say their fight is still not over despite the legislator''s arrest.

A determined Sampat Pal (48), whose group of lathi-wielding women is fighting against discrimination and atrocities in the Bundelkhand region for a decade now, took up the cause of the dalit girl after her relatives claimed that she had been framed in a false theft case. 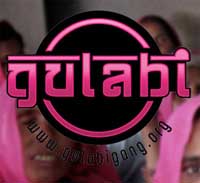 Sampat claimed she was offered a bribe of Rs five lakh and promised several development works in her village by MLA Purshottam Naresh Dwiwedi if she dropped the agitation.
"The fight is still not over... her (girl''s) family is living in fear in their Shahzadpur village and we want to help," he said, adding that the accomplices of the MLA were still moving about freely.

"After we came to know that she had been framed in a case of theft in the house which is guarded like a fortress, we organised the first protest in Banda and later at the house of the MLA where she was raped and beaten up," she said.

"The girl told me how the MLA told her to marry one of his servants so that he could continue with his misdeeds within the confines of his house," she alleged.

Alleging that the jailor of the district prison where the victim had been lodged did not allow any of her family members as well as her sympathisers to meet her, Sampat alleged that "the MLA''s cronies were free to go and threaten her anytime".