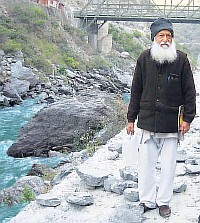 For those who don't know him, Guru Das Agarwal — with his flowing white beard and piercing eyes — might appear like a rishi. For those who know him, he's nothing less. Probably it is an indication of the kind of esteem in which the 76-year-old former IIT Kanpur professor is held that when he decided to go on a fast-unto-death to protest against the hydel power projects being built on the upper reaches of the Ganga, support began pouring in.

Bloggers compared his fast to a tapasya and his efforts to save the Ganga to those made by Bhagirath to bring the river from heaven to earth. Petitions were signed — scientists, students and religious leaders pitched in with their support and the result was that within a week of Agarwal's fast, the Uttarakhand government was forced to suspend two of its projects at Bhaironghati as well as Pala-Maneri. However, Agarwal refuses to break his fast, till the 600 mw Loharinag-Pala project, being executed by National Thermal Power Corporation (NTPC) is also withdrawn. The question is: why is this septuagenarian professor opposed to these projects?

Barefoot environmentalist
The answers probably lie in Agarwal's background. The former head of department of civil and environmental engineering at IIT Kanpur is widely acknowledged as the doyen of environmental engineering professionals in the country. His students remember him as an awe-inspiring teacher; many — like Magsaysay awardee Rajendra Singh and Centre for Science and Environment founder Anil Agrawal — have earned a name for themselves in the field of conservation.

As a member secretary of the Central Pollution Control Board in the early 1980s, Agarwal has been credited with shaping India's policies for improving environmental and pollution regulatory mechanisms. For the past few years, he has been living in Chitrakoot and teaching students at the Mahatma Gandhi Chitrakoot Gramodaya Vishvavidyala. A bachelor, he is known to follow a spartan, Gandhian lifestyle, living in a cottage, where he cooks his own meals, wears homespun khadi and travels by bicycle.

The manner in which Agarwal chose to register his protest was characteristically Gandhian. On April 14, he wrote a letter to some associates in which he outlined how the quality, quantity and flow of the Ganga between Gangotri and Uttarkashi were being disrupted to generate hydro-electricity. "Already, long stretches of the Bhagirathi Ganga remain waterless for long periods. In the near future, this may become the state of the entire river. At least the Bhagirathi, upstream of Uttarkashi, should be spared of any works that disturb its natural flow, ecology, purity or piety. After brooding over it for several months, I have decided to oppose such works with all the might that I have," he wrote. Read more..