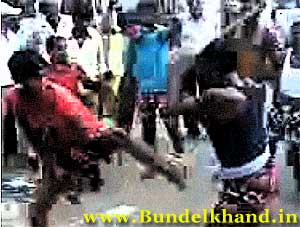 As Diwali morning dawned Friday, young men armed themselves with 'lathis', waving the canes in the air and charging at their opponents. No, this wasn't a fight - but just how the festival is celebrated in Uttar Pradesh's Banda district.

Called 'Lathmar Diwari', cane fights are a tradition in several villages like Triveni, Amratpur Kherwa, Ghacha and Barokha Khurd in Banda, some 200 km from Lucknow.

Armed with canes, the men assemble in the fields and constitute different teams. Two teams, each comprising 18 members, play 'Lathmar Diwari' and these entertaining fights go on till evening.

'It's an action-packed game that follows a set of rules and regulations - like the canes used by two opponent teams should be more or less of the same size and thickness,' Suresh Richaria, a 32-year-old who has been participating in Lathmar Diwari for the last five years, told IANS over telephone from Barokha Khurd village.

'Teams involved in Lathmar Diwari undergo several months of training...for us the 'lathmari' (cane fight) is part of Diwali festivities, which also include the usual fireworks and lighting diyas,' he added.

According to locals, the foremost rule you have to keep in mind while playing Lathmar Diwari is that you cannot be violent and have to attack and shield yourself in a prescribed manner.

'If you don't follow the rules, you are disqualified and chances are you won't be part of any team to play Lathmar Diwari for the next few years,' said Jai Narayan Sahu, a resident of Ghacha village.