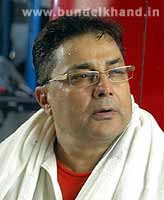 Not long ago actor, director and producer Raja Bundela was bashed up by the little know 'Bajrang Sena' activists at a cinema hall in Bhopal after the release of powerful social movie titled Partha, which not only portrayed mental and physical exploitation of a village girl but showed some of the "priests working as thieves".

The same Raja, who is a NSD graduate, is now playing a new role on the political stage to expose 'political thieves and exploiters' by launching a movement for creation of a separate Bundelkhand state comprising old 14 mineral rich, hunger-ridden districts of Uttar Pradesh and Madhya Pradesh. "The only solution to all problems-poverty, hunger, lack of development and non-existent infrastructure in region is the creation of a separate Bundelkhand. People are simply fed up with hollow politics of development packages" said Bundela laughing at both AICC general secretary Rahul Gandhi and UP Chief Minister Mayawati.

Recently, Raja Bundela who had also produced and directed popular TV serial Mujhe Chand Chahiye as head of Bundelkhand Mukti Morcha (BMM) announced action plan to remind the Centre of the promises made at the time of independence to the erstwhile rulers of Bundelkhand-Baghelkhand through a Covenant (Treaty) signed by 35 Rajwaras (Rulers) with Government of India. The Treaty had promised creation of United State of Vindhya Pradesh but instead of that the region was divided between UP and MP.


The action plan includes 170-km long two-week Jan Jagran Yatra from Chitrakoot to Khajuraho culminating in a convention in Khajuraho mid-December. Earlier, in course of a series of meetings in the region he kept harping on the theme that the rulers in Lucknow, Bhopal and at the Centre are treating the region the way British Raj had treated. Mayawati, who first favoured a separate state, now wants a special package of Rs 80,000 crores for development of Bundelkhand and Poorvanchal while Rahul Gandhi wants creation of Bundelkhand Development Authority with Rs 8,000 crore package. 'Why nobody wants a separate state"? asks Bundela.

The BMM has already created Bundeli Sena and enrolled over 35,000 youth so far to spread the movement and in a bid to make it a national movement it has established working relationship with K Chandrasekhar Rao-led Telangana Rashtra Samiti that is for fighting for a separate Telangana State, Shibu Soren-led Jharkhand Mukti Morcha, Ch. Ajit Singh-led movement for Harit Pradesh and Ram Kishen Singh Tomar who heads the movement for smaller states. Now Raja Bundela and BMM would knock the doors of the Supreme Court to get the 1950-Treaty implemented. According to a determined Bundela, Bundelkhand was a state with Nandgaon till 1935 with Kamla Prasad Saxena as Chief Minister.


Bundelkhand, the land of valiant rebels including Jhansi ki Rani, comprises seven districts of UP and six districts of MP besides 10 Lok Sabha and 60 Assembly seats. Geographically it lies between the Indo-Gangetic to the north and the Vindhya Range to the south with gently-sloping upland, distinguished by barren hilly terrain with sparse vegetation, although it was historically forested.

The region particularly in UP known for water famine and migration has its own glorious history dating back to 14th century when Pancham Singh Bundela (Maharaja Hemkaran), a Rajput clan, established Bundelkhand Kingdom. It was expanded during Emperor Akbar's time. Hindu mythology traces its separate identity and existence to Lord Krishna's time.

Permalink Submitted by Deepak Jhasia on Thu, 2009-11-05 15:10.
PRANAM sir, I am a son of BUNDELKHAND,Jhansi would like to know- what if we people are provided with a new state "BUNDELKHAND" as you and I aspire,what kind of growth and development BMM had in mind after victory ? with regards, Deepak Kumar Jhasia

Permalink Submitted by VIPIN HARITAJ on Fri, 2009-11-20 06:40.
IN EVERY PEOPLE OF HARIT PARADESH SUPPORT OF YOUR NEW STATE NAME IS BUNDALKHAND.

U.P.S.C. had asked several question on the viability of proposed bunelkhand state from me last year.I really concern on progress and development of the region.like minded people are in touch with me they are scientist,scholars,civil servants etc.,
they are worried about political game played by rajas,regional politicians,goons .
i want to utilise the energy of these youth in the progress & development of the region.please remove the hidden worries & i want an explanation how new state creation will benefit the people and not mere replacement by new power holder that
will continue the exploitation.

It's just our necessity.

It's just our necessity.

we want bundelkhan state any how

see in anywhere,any place in india every place developed after be a self state so we want bundelkhand state any how

sir , i m totaly supported to u? and we will make a new state of UP bundelkhand rajya....