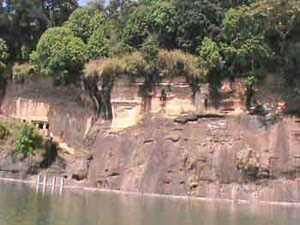 Ven Dr. Sumedh, Ven Nand Sheel, Er. Dinesh Dinkar of Jhansi and 12 more lay Buddhists join this search operation in forest of Deogarh, Lalitpur UP, The Bhagwan Mahaveer Century is under the DFO of Kaimoor, Mirjapur, & DFO of Lalitpur UP. On 16 October, 2013 i.e. the further visit to Deogarah, Lalitpur, UP and searched the Ancient Buddhist cave on river bank of Betwa to found some solution for their restoration as well as development of such Ancient monument. These caves are on the western facing side of forest cover in UP. Some of the snapped photos of that visit are attached for kind attention of Buddhist World for protection as well as development as Buddhist tourist spot for the mankind. The local Yadavs, Tribes and Jains could help us for this search. We must thankful to them for their kind support ! We hope the World Buddhist community will look after the site for Buddhist tourist spot as well as forest Monastery !!! Ven Dr. Sumedh.

Mahavir Swami Wildlife Sanctuary is situated in Uttar Pradesh in Lalitpur. The sanctuary is spread over the area of 5.4 sq kms and is established in 1977. Jhansi is 125 kms away from the sanctuary which is splendid entrance to the Bundelkhand, rendered well-known by the legendary Rani Laxmi Bai. The main species found here are Nilgai, leopard, Sambhar and wild boar which are the reason of attraction for number of tourists every year.

There are many animals found inn the sanctuary which are wild and endangered. These have been the main attraction of tourists. The wild animals which are found here mainly include leopard, wild boar, Neel gai and sambhar and it also has wealthy diversity of avian inhabitants. The sanctuary is also rich in flora.

When you are visiting the Sanctuary please make sure that clothes or dress is in camouflage color which is khaki, green, etc. Do not make a loud noise which can disturb the lifestyle of the animals there. Do not Litter paper or throw left over food in the forest. Proper precautions should be taken while doing photography which will not disturb the animals and birds there.

Lalitpur District (Hindi: ललितपुर जिला) is one of the districts of Uttar Pradesh state of India. Lalitpur district is a part of Jhansi Division. Lalitpur is the main town and administrative headquarters. The district occupies an area of 5,039 km². Lalitpur District is a part of Jhansi Division and was carved out as a district in the year 1974. Lalitpur is really not only the heartland but also a heart shaped district of Bundelkhand region. It is connected to Jhansi District of Uttar Pradesh by a narrow corridor to the northeast, otherwise almost surrounded by Madhya Pradesh state. Lalitpur district lies between latitude 24°11' and 25°14' (north) and longitude 78°10' and 79°0' (east) and is bounded by district Jhansi in the north, districts Sagar and Tikamgarh of Madhya Pradesh state in the east and Guna district of Madhya Pradesh separated by river Betwa in the west. The district had a population of 977,447 as per the census of year 2001. This district is well known for its culture, peace and natural beauty and have maximum dams in the state. Also has a number of historical and cultural places like Devgarh, Seeronji, Pavagiri, Devamata, Neelkantheshwar at Pali, Machkund ki Gufa. Lalitpur town has variety of places like many Hindu & Jain temples. Raghunathji (Bada Mandir), Shivalay,

The district forms a portion of the hill country of Bundelkhand, sloping down from the outliers of the Vindhya Range on the south to the tributaries of the Yamuna River on the north. The extreme south is composed of parallel rows of long and narrow-ridged hills. Through the intervening valleys the rivers flow down over ledges of granite or quartz. North of the hilly region, the granite chains gradually turn into clusters of smaller hills.
The Betwa River forms the northern and western boundary of the district, and most of the district lies within its watershed. The Jamni River, a tributary of the Betwa, forms the eastern boundary. The Dhasan River forms the district's southeastern boundary, and the southeastern portion of the district lies within its watershed.

The district is now facing a secessionist movement originated in southern Uttar Pradesh and northern Madhya Pradesh to create a separate state of Bundelkhand, as this area is traditionally called by locals.

The climate of the district is sub-tropical, which is characterised by a very hot dry summer and a cold winter. Similar to other districts of the Bundelkhand region, this district also has four distinct seasons in a year. The summer season is from March to mid-June, the southwest monsoon is from mid-June to September. Post-monsoonal transition between October and November months constitute the post-monsoon season and the winter season lasts from December to February. 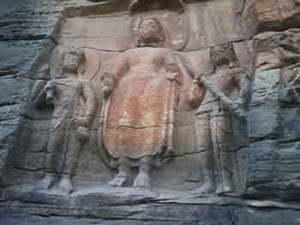 The territory of the present-day Lalitpur district was part of the state of Chanderi, founded in the 17th century by a Bundela Rajputwho was descended from Rudra Pratap of Orchha. Chanderi, along with most of Bundelkhand, came under Maratha hegemony in the 18th century. Daulat Rao Sindhia of neighboring Gwalior annexed Chanderi state in 1812. In 1844, the former state of Chanderi was ceded to the British, and became the Chanderi District of British India, with Lalitpur town as the district headquarters. The British lost the district in the Indian Rebellion of 1857, and it was not reconquered until late 1858. In 1861, the portion of the district west of the Betwa, including Chanderi, was returned to Gwalior state, and the remainder was renamed Lalitpur district. It became a part of Jhansi district from 1891 to 1974. In 1974, the district was carved out from Jhansi district.

In 2006 the Ministry of Panchayati Raj named Lalitpur one of the country's 250 most backward districts (out of a total of 640).[1] It is one of the 34 districts in Uttar Pradesh currently receiving funds from the Backward Regions Grant Fund Programme (BRGF).[1]

Lalitpur is divided into three tehsils, Lalitpur, Mehroni, and Talbehat; four towns, Lalitpur, Mehroni, Talbehat, and Pali; and 754 villages. In 2010 the district magistrate is Ranvir Prasad, and the Superintendent of police is Akash Kulhary (2006 batch IPS officer), and the District Information Officer is Murlidhar Singh.

The city is well connected by railways and road transport.