Medicinal and Aromatic Plants farming may be a Boon for Bundelkhand Farmers : CSIR-CIMAP 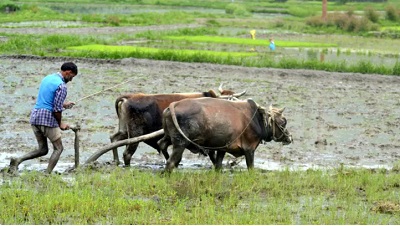 Medicinal and Aromatic Plants farming may be a Boon for Bundelkhand Farmers : CSIR-CIMAP

The cultivation of medicinal and aromatic plants like Lemongrass, Sataver, Ashwagandha, Khas and others is proving to be a boon for farmers in the Bundelkhand region as these medicinal plants require less water and can stand the hot and humid weather conditions of the region.

Alok Kumar, a chief scientist of the CSIR-Central Institute of Medicinal and Aromatic Plants (CIMAP), has emphasized strengthening the cultivation, processing and marketing of medicinal and aromatic plants in the Bundelkhand region.

He highlighted how medicinal plants can adapt to the climatic conditions of the region and bring financial gains to the farmers. "In just eight months, a farmer can yield 50 litres of lemongrass oils. Lemongrass cultivation needs no special arrangements to save the plants from extremely hot conditions nor does it need too much water," he said.

A road map for agrarian growth will soon be prepared for the region by the CSIR-CIMAP, he added.

"Bundelkhand can be developed as an ecotourism spot as it has a good forest cover. Also, scientific goat farming in which scientific practices are used for better milk production can help double the income of goat farmers in the region," the scientist said.