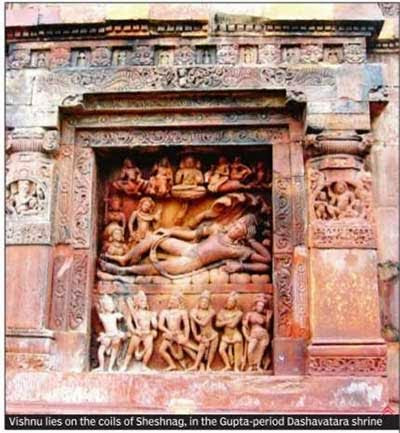 In a quiet corner of Uttar Pradesh that sticks into its neighbouring state, amidst lush greenery, is a slice of heritage that few have set eyes on. The Betwa flows nearby, separating the area from Madhya Pradesh. If a visitor enters this tranquil setting, he is startled by the beauty and antiquity of what he witnesses. A short drive from the district headquarters Lalitpur, the forests running on both sides of the road part to give a glimpse of a small shrine on the right. A board put up by the Archaeological Survey of India advertises the presence of the Dashavatara Temple.

Time and ignorance have camouflaged this structure well and what looks like a nondescript structure from a distance is striking up close. As the name suggests, the temple is dedicated to the god Vishnu. Created on each of the four external wall faces of this otherwise innocuous temple is a riot in stone. While the front entrance has sculptures of various gods and goddesses in moods varying from contemplation to affection made on it and above them is Vishnu flanked by two of his avatars Narasimha and Vamana, it is the sides of the temple that arrest the viewer. On each of the three sides of the temple is a niche made in the wall and carved into the niche are dramatic representations of Vishnu's various forms. One niche has Vishnu lying in relaxed pose on the coils of Sheshnag, shown here in full glory with seven hoods. At Vishnu's feet is Laxmi while various gods and goddesses soar around them. Another niche - the one at the back - depicts the concept of Nar Narayana or the fusion of the divine and the human. The third niche brings alive the story of Vishnu coming to the aid of the trapped elephant Gaja. So delicate are the lines made on stone that the elephant's faith in his god is almost tangible. Sadly, the idol in the inner sanctum is missing and one can only imagine its beauty, on the basis of the rock cuts on the outer walls.

The forested grounds opposite the Dashavatara rises abruptly into a hill. Covered in vegetation, the hill directly overlooks the Betwa on three sides. The fort atop the 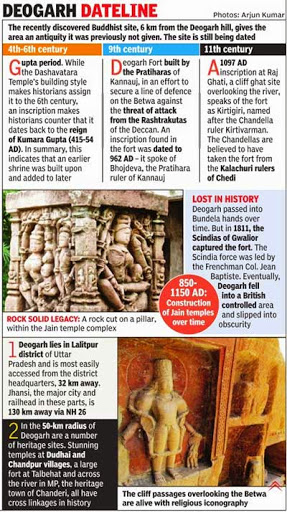 hill was built at this spot with a view to cement a line of defence on the river, from any attackers coming from the south or west. While the fort is largely ruined, conservation efforts within have seen a set of Jain temples being preserved. The ASI lists as many as 31 Jain temples here, dated into two broad periods of temple-building. Given the wide range of Jain religious craftsmanship displayed here, it seems that the religion thrived here for several centuries. In what is a virtual museum of Jain art, the place has manasthamba votive pillars standing in the courtyard of temples; sahastrakuta pillars each depicting a thousand gods as well as panels showcasing mythological events such as the penance of the various tirthankaras. Both the quality of the rock cuts and the sheer numbers amaze a visitor. The place is a growing pilgrimage center for the Jain faith, but needs greater exploration. Amidst the dense undergrowth that surrounds the Jain complex on the hill, human hands have cut through a walking path which allows visitors to reach further treasures around. In one corner is a ruined Varaha shrine. In three separate spots, steps cut into the cliffs overlooking the river from ghats. Alongside most of these are Hindu rock cuts which predate the Jain temples at the top of the hill. In recent times, fresh archaeological finds in the vicinity have revealed that the site also had a Buddhist past in ancient times.