The historic fort at Jhansi, popularly known as 'RaniJhansikaquila', has turned 400 years old this year. It has been a mute spectator to the turns of events in the Indian history and withstood heavy bombardment of British forces during the First War Of Independence. 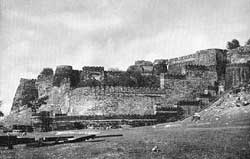 To celebrate 400th anniversary of the fort, Archaeological Survey of India on Thursday organized a function. It also included a photo exhibition and a seminar. Culture minister Chandresh Kumari Katoch, who was the chief guest, started the celebrations by releasing pigeons.

The historical fort was built in 1613 by the ruler of Orcha, Beer Singh Judev. Spread across 49 acres, the fort stands in the heart of the city and is reflects the architecture of Bundelas and Marathas. The fort withstood the heavy attack of British forces led by Hugh Rose on Rani Laxmi Bai.

The anniversary celebration was marked by traditional Bundeli folk dances and folk songs at the central garden of the fort. Prior to this the culture minister and other dignitaries paid homage at the mazars of Rani Laxmi Bai's trusted lieutenants -- Ghulam Gaus Khan, Munni Bai and Khuda Baksh.