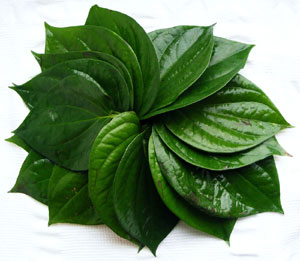 Betel leaf growers in Chhatarpur have claimed 100% damage of their crop after two spells of untimely rain and hail in the region. Crop worth about Rs 3 crore was damaged. Known as Mahoba paan, desi variety of betel leaf is exported to Pakistan and is highly popular in Uttar Pradesh.

Standing betel leaf crop in few hundred acres of area has been damaged, said Rajesh Mahton, a big betel leaf grower in Maharjpur, whose family has been in the business for past 50 years.

Omprakash Chourasia, another paan grower said, "Everything has damaged. The nature has not spared anything."

This is second successive year when paan growers have incurred huge loss. Last year, there was a bacteria attack because of drought.

"Variation in day and night temperature had led to huge losses in 2015. Now, hailstorm and rain hit the crop," Chourasia said.