Once an ancient kingdom, but now straddling the states of Uttar Pradesh and Madhya Pradesh, around the city of Jhansi, the area remains relatively underdeveloped compared to other parts of India. Consequently many local people still rely on agriculture for their livelihoods. Faced with drought conditions, and with limited capacity for water storage, thousands of smallholder farmers will now face considerable hardship, or even destitution.

The current water scarcity, the most severe this century, has parched an area the size of Israel. Reviewing satellite imagery from earlier in the year, an IWMI research team has established that the likelihood of drought was emerging as early as June, when abnormally low rainfall patterns became evident. Space based technologies, often referred to as remote sensing, should be more widely used in drought prediction, say the IWMI experts, as they can identify potential problems well before the extent of ground conditions are evident.

“Looking at the aerial images you get a sense of the enormity of what is going on,” said Amarnath Giriraj who leads IWMI’s drought mapping project. “You can clearly see that paddy fields are bone dry and that much farmland has been left fallow due to lack of water. But we hope that in future we can use remote sensing to pick up drought trends before there are serious water shortages, so that relief efforts can be more timely.”

The satellite images were generated as part of IWMI’s ongoing South Asia Drought Monitoring System (SADMS) project, developed in partnership with the World Meteorological Organization, the Global Water Partnership and with support from the CGIAR Research Program on Climate Change and Food Security. Converted into easy to read maps, the images have been sent to Bundelkhand.in, a website that brings together social activists, community groups and local policy makers in the region. This is the first time that the SADMS has been used. 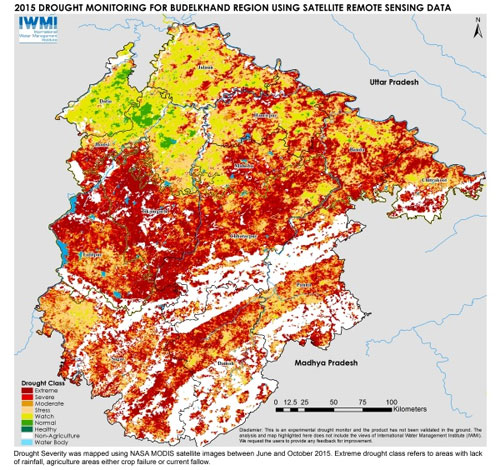 “The maps have been invaluable,” said Ashish Sagar, a leading social activist in Bundelkhand region. “We have been sharing them with farmers and the local authorities so that we can better plan a response.”

IWMI has adopted an innovative approach to developing the system using remote sensing data from multiple sources. The Integrated Drought Severity Index uses the condition of vegetation, rainfall, temperature and soil moisture to determine severe drought areas. This gives a far more accurate indication of impending drought than conventional methods. This can assist drought mitigation planning and response and help improve the overall capacity of communities to be more resilient and cope with these events.