(News) Bundelkhand on the verge of famine: Swaraj Abhiyan

Bundelkhand on the verge of famine: Swaraj Abhiyan 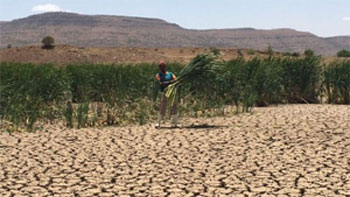 With three droughts in successive years, the Bundelkhand region of Uttar Pradesh is on the verge of famine, Swaraj Abhiyan leader Yogendra Yadav today claimed and called for urgent steps by the Centre and state government to address the problem.

Yadav said that he along with noted economists Jean Dreze, Ritika Khera and Sanjay Singh conducted a study in seven districts of Bundelkhand region of Uttar Pradesh.

The survey covered 27 tehsils and 108 villages of which 41 villages have starvation-like conditions.

"The survey also revealed that nutrition has become a major issue in the villages there as 79 per cent people interviewed said they have not had a full meal for the past two months," he said.

Yadav said that even under the MNREGA, the employment which the villagers have got was only 9.5 days a month on an average. He noted that the survey was a mere interview and the figures could not be independently verified.