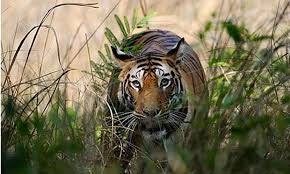 The backward bundelkhand region of Uttar Pradesh is all set to get two new tiger reserve in near future due to closure of the Panna tiger reserved in the adjoining Madhya Pradesh following the ambitious Kane-Betwa river link project.

The two new tiger reserves will come up at Ranipur Sanctuary in Chitrakoot and Banda districts and another at Mahavir Sanctuary in Lalitpur.

Ranipur sanctuary is spread out in 230 sq. kms in Chitrakoot-Banda region. It is the natural habitat of many animals including leopard, tiger, sloth bear, sambar, blackbuck, peafowl, spur-fowl, jungle fowl, printed partridge, fishing cat and chinkara.

Located in Lalitpur , the Mahavir Wildlife Sanctuary is spread over an area of 5.4 sq. km. The sanctuary is 125 km from Jhansi, the magnificent gateway to the Bundelkhand region, rendered famous by the legendary Rani Laxmi Bai. The main population of the sanctuary consists of animals such as leopard, neel gai, wild boar and sambhar and there is a rich variety of avian population. The region is also very rich in flora.

Official sources here today said that process for shifting of the tigers of Panna tiger reserve would start soon due to construction of a dam on Kane river in MP under Kane Betwa link project. There are 30 tigers in Panna including 12 cubs of which half would be given to UP for the two new tiger reserves and half will be shifted to Bandhavgarh in MP.

Sources said entire Panna tiger reserve would be inundated after the contruction of the dam for the river linking project.UP and MP governments have approved the project and in 2008, the cost was estimated at Rs 9,393 crores.

An area of 5852 hectares of area of Panna reserve would be affected in which 2900 hectare would be accommodated by UP through these two new reserves.

Presently UP has three tiger reserves now - Dudhwa, Pilibhit and Amangarh in Bijnore district and there are 118 tigers there. Pilibhit tiger reserve was the latest of the state and country's 45th tiger reserve which came to existence in 2014.