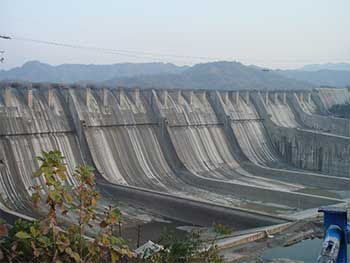 Uttar Pradesh chief minister Akhilesh Yadav today laid the foundation of a dam project in the arid Bundelkhand region of the state.

The dam project is expected to provide water for drinking and irrigation to 378 villages and the adjoining parched pockets.

Besides, three farms each spanning 10 acres would be developed near the dam as part of the project to grow food grain, fruits and vegetables.

These farms would employ farming technology developed by Israel, which has mastered the science of high agricultural productivity in arid acreage, scarce irrigation and low fertility of soil.

The multipurpose dam estimated to cost Rs 612 crore would be constructed at Airach in Jhansi district. It would be developed 40 km downstream from Parichha dam on river Betwa at village Jhujharpura.

However, the project would not effect any rehabilitation of the nearby villages and would be completed by March 2018. The whole project, comprising the reservoir and other facilities/development, would span almost 105 hectares of land and forest area.