Construction of Ropeways in Barsana, Mirzapur and Chitrakoot

The Uttar Pradesh government has given a green signal for the construction of ropeways in Barsana, Mirzapur and Chitrakoot- all religious places and known to attract thousands of devotees each year, an official said on Wednesday. 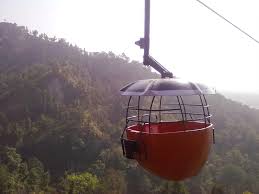 The proposals were cleared by the Industrial and Infrastructure Development Corporation (IIDC). Under the proposed project, ropeways would be built under the public-private-partnership (PPP) model.

The Mathura-Vrindavan Development Authority has now been directed to create a special purpose vehicle (SPV) for construction of a ropeway in Barsana, the birth place of Goddess Radha.

The 'lath maar holi' of this place is world famous and we want to tap the potential of this place as a tourist attraction, an official told a news agency.