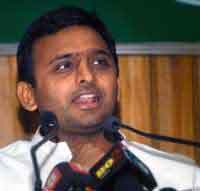 Chief Minister Akhilesh Yadav said on Thursday that his government was committed to improve the condition of Bundelkhand and had taken steps to tackle the power and water crisis plaguing this rugged region.

"We are now focusing on the Bundelkhand region and have initiated several projects that will solve the problems of the masses. We are working to improve the power scenario and to provide water. Once we are through, we will launch employment schemes here," Yadav said while addressing a function held to distribute unemployment allowance and Kanya Vidyadhan in Jhansi on Thursday. Earlier this month, the Samajwadi Party government had started distribution of allowance for jobless youth. In the first function held in Lucknow, over 10,000 youth from seven districts of Lucknow division and Kanpur received the dole. In Jhansi, the Chief Minister gave Kanya Vidyadhan to 1,530 girls and unemployment allowances to 4,526 youths.

The UP government is giving Rs 1,000 per month as unemployment allowances to jobless youths, a one-time financial assistance of Rs 20,000 under the Kanya Vidyadhan to girls passing class 12, and Rs 30,000 to girls of minority communities. "We had promised to give unemployment allowance to jobless youth and financial help to girls from below poverty line (BPL) families during our party's election campaign and my government has fulfilled that promise," the Chief Minister said. Yadav said his government was committed to the development of the state and would generate jobs for people.

"We have invited private entrepreneurs to set up their units in UP. We are giving unemployment allowance and will also work to provide jobs," he said.

The Chief Minister also promised to improve the power scenario in Bundelkhand and strengthen the road network in the region. He also announced up-gradation of the Dhyan Chand Stadium along with other development schemes for the region. Yadav, who is also the state president of Samajwadi Party, said his party would contest the Assembly elections in Madhya Pradesh. "A large number of leaders of MP have approached us and sought our party's tickets from Panna, Chhattarpur and other districts," he said. "People are looking towards Samajwadi Party because they are fed up with the Bharatiya Janata Party rule in MP and the Congress regime at the Centre. They know the SP government is pro-people and pro-farmers, therefore the people are eager to support us," Yadav said and added: "We are expecting a large number of seats in the MP Assembly polls."