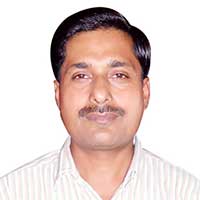 In a region where even the cops dared to venture, he traversed on his bicycle meeting people, especially women labourers, trying to make them aware of their rights, so that they could demand their rightful wages from the farm and brick kiln owners.

Forty-year-old Sanjay Singh, who holds a doctorate degree in sociology, knows the dreaded Chambal region, which was once infested with the dacoit gangs, immortalised by many a Bollywood films, like the back of his hand.

Singh has been active in the region for nearly 20 years during which he has taken up a number issues that were closely associated with the living conditions of the people in this arid, remote and backward area.

Better known as the “waterman” of Bundelkhand, Singh has seen the plight of the people of the region comprising Jalaun, Jhansi, Mahoba, Banda and even a few districts in the neighbouring Madhya Pradesh.

In an area, where rains are scanty and with a few rivers, water was a precious resource and Singh fully realised it. Keeping that in mind, Singh has formed “Jal Saheli” (water friends), which are women’s groups, in the villages in the Bundelkhand region in UP. “The members of the group take steps to conserve water resources in their respective villages,” he said.

“At present Jal Saheli groups are working in 93 villages. The members have been successful in preserving ponds and other natural sources of water,” Singh told Deccan Herald.

Singh, who is from Mirzapur district in Jalaun district in UP, said that the “water conservation campaign” aims at involving citizen action groups for ensuring water and sanitation for all. “Working in this region where there is very little infrastructure, literacy and health facilities is not an easy task. It is fraught with dangers and risks. There are people with vested interests, who will go to any extent to have their way,” he says.

“Kidnapping used to be a cottage industry in the region. The dacoit gangs used to run a parallel government. The government authority was barely visible,” he remarked.

And Singh’s journey in the past 20 years was a testimony to the same. “My father, Lalla Singh, was killed by the people, who did not want me to work among women labourers, who were exploited by the employers,” he said.

“I was scared initially. They threatened to kill me as well,” he said. Singh, however, refused to be cowed down by threats and continued his work of creating awareness among the people. “I had a bicycle initially and I started with five villages. We would hold meetings with the residents and discuss their problems and then try to find the solutions,” he said.

“Such was the degree of fear among the people that it took me three years to persuade people to attend the meetings. But once they agreed, the meetings became a big hit,” he added.

The efforts made by Singh yielded positive results in his home district of Jalaun and the poor people in the villages started seeking work under the MNREGS from the local authorities. “Earlier, the labourers, especially women, working under the MNREGS, were exploited. They were paid less wages and were not given work also,” he pointed out.

Singh has also formed a voluntary organisation “Parmarth”, which is currently active in 600 villages in Jalaun, Hamirpur, Jhansi, Lalitpur districts in UP and Teekamgarh and Chatarpur districts in Madhya Pradesh.

“The organisation works for promotion of local resource-based livelihood opportunities for poor people and collaborates and liaise with government and activation of the local governance,” he said. “We stress on involvement of small and marginal farmers for ensuring inter and intra households food security and experiment to make the small and marginalised farming as viable and sustainable livelihood option and give recognition to women as farmers and advocating for its replication with the support of administrative forces,” Singh said.

Singh and his team also try to address the issues concerning gender disparities and adverse sex ratio, besides violence against the women. While the people may not have any complaints against Singh, his wife does. “My wife often complained that I did not take care of the family like other husbands do. But then she also knew the importance of my work,” he said.