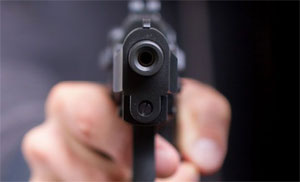 A marginal farmer was shot at on Saturday night by a local moneylender at a village under Gourjhamar police station in Sagar.

The farmer had taken a loan of Rs 10,000 for treatment of his ailing father and was supposed to return Rs 20,000 after a month.

Farmers are incurring heavy losses due to crop damage and scanty rainfall in Bundelkhand. Chief minister Shivraj Singh Chouhan has warned local moneylenders not to harass farmers over loan recovery and has instructed police to take action against untoward incidents.

Uday Bhan Thakur, 35, a marginal farmer of Bijora village who owns 2.5-3 acres of land, had taken the loan from Ravindra Lodhi around 20 days before and had to return double the amount i.e. Rs 20,000 after a month. According to Thakur, he was returning from Gourjhamar on Saturday evening when Ravindra Lodhi and one Jagdish stopped him and took him in their SUV to a desolate place.

The duo started consuming liquor while the farmer pleaded them to leave him. Thakur said, “They asked me to return Rs 20,000, although I told them that one month of time was not yet over and promised to return the amount after due date. The two started misbehaving and Ravindra shot at me with his 12 bore gun while Jagdish attacked me with a sword and left me injured.”