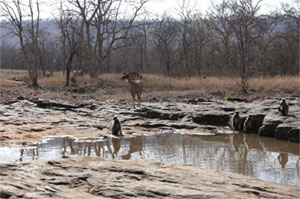 Setting aside all controversies surrounding the first of river interlinking projects, the National Board of Wild Life (NBWL) Standing Committee has given a go ahead to Phase I of the Rs 9,300 crore Ken-Betwa project, minutes of its 23rd August, 2016 meeting accessed by ET confirm. The project will still need a go ahead from the Forest Advisory committee and a final approval of the Environment minister for implementation - both of which are unlikely to be troublesome to get.

The river interlinking project to connect the river Ken in Madhya Pradesh with the Betwa in Uttar Pradesh is aimed at improving water supply to the Bundelkhand area. It involves submergence of over 4,000 hectares land in the Panna tiger reserve. The project will result in a direct loss of tiger habitat of 105 sq.km, loss of vulture nesting sites and disturbances- issues raised at the meeting by the NTCA.

The go ahead has come with the condition by the NTCA that three wild life sanctuaries - Nauradehi, Rani Durgavati and Ranipur Wild Life Sanctuaries - be integrated with Panna reserve to ensure tiger corridor continuity and dispersal routes. The areas of Chhatarpur and South Panna Division shall be notified as the buffer of the protected reserve area due their historical tiger presence.

The Committee as per the minutes of the 39th meeting of the NBWL Standing Committee "agreed to recommend the proposal" with the conditions prescribed by the Site Inspection team and National Tiger Conservation Authority. The minutes note that the Uma Bharti led Water Resources ministry has agreed to all conditions proposed including integration of sanctuaries, no new mining leases in the tiger dispersal routes and power generation facilities outside the reserve.

While the project was given an 'in principle' approval at the 38th meeting on 10th May, 2016 without a site visit, there were differences of opinion on the height of the water impounding structures and resulting ecological impact. The minutes state that further consultations were held with the National Tiger Conservation Authority and hydrological experts on the same.

As per the final views on the combined report, Director Wildlife Institute of India (WII) has indicated that "the group was convinced that lowering the dam height by 10 m will result in non-availability of water for linking because due to nature of the valley, water storage is available only in top few meters, thereby reduction of 32% in water storage".