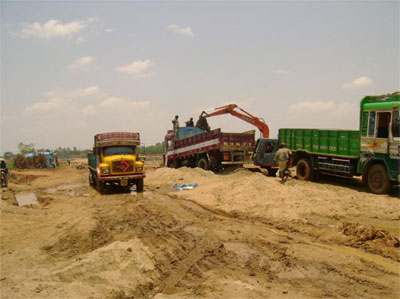 New Delhi, Jan 24 A plea alleging large scale unauthorised and illegal sand mining with the use of heavy machinery in Banda district of Uttar Pradesh despite prohibition today prompted the National Green Tribunal to seek responses from the Centre and the state government.

A bench headed by NGT Chairperson Justice Swatanter Kumar issued notices to the Environment Ministry, UP government and others while seeking their replies in two weeks.

The NGT was hearing a plea filed by UP resident Brij Mohan Yadav, who has alleged that illegal sand mining was being carried out in rivers Betwa and Ken flowing through Banda district despite NGT's direction to state authorities to "ensure that no illegal mining is permitted" in the district, particularly on the rivers Badain and Ken.

The plea, filed through advocate Rahul Choudhary, alleged that despite giving an undertaking before the NGT that no sand mining would be allowed in the area, District Magistrates of Banda and Chhattarpur (Madhya Pradesh) and Zila Panchayat CEO have failed to comply with the direction of tribunal.

Referring to reports that various 'influential' leaders were involved in illegal sand mining in the area, the plea said non-compliance of the NGT order and unregulated sand mining can change the natural course of the Ken river.