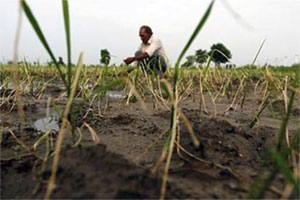 NHRC has taken suo motu cognisance of CNN-IBN's reports on starvation in the famine-hit Bundelkhand region.

"The media reports, carried on March 28 exposing the plight of the poor inhabitants of the Bundelkhand region, if true, raise serious issues of violation of human rights to life, equality and dignity of the people," observed the Commission and issued notices to the Chief Secretaries of both the states, calling for detailed reports within four weeks.

This comes just a day after Uttar Pradesh Chief Minister Akhilesh Yadav visited the region to distribute relief material. Akhilesh was in Mahoba, one of the worst-hit districts, to launch the Samajwadi Sukha Rahat Samagri Vitaran Karyakram - where free food packets were given to those categorised as poorest of the poor.

"The Central government has provided us funds for relief but that is not enough. It is both state and Centre's responsibility to take care of the drought situation in Bundelkhand," he said.