No NREGA work in Bundelkhand for locals coming home from Delhi

No NREGA work in Bundelkhand for locals coming home from Delhi 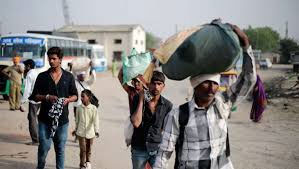 The area around Delhi's Nizamuddin railway station is home to tea stalls, intricate clusters of roadside hotels, and home to India's migrant labourers. Under and around the Sarai Kale Khan flyover, a stone's throw from the station, is where they settle, bringing out their blankets and kerosene stoves and cookware; eating, bathing, washing and sleeping right there. The most coveted spots are tucked under the ascent and descent of the flyover; in winters, the concrete makes for a cozy roof.

On a normal day, you would find hundreds of migrant labourers sitting on their haunches waiting to be picked up by contractors. All kinds of skills up for sale: painting, plumbing, masonry, tile laying.

But demonetisation has cleared the footpaths of people and jobs. Just a few faces are left, hoping less competition would bring them work. But the faith is wearing thin.

Santosh and Kalpana have their stuff packed and covered with a coarse grey blanket. Their four kids are roaming around - the winter shade of the flyover is their familiar home for a couple months every year. The youngest, who is four, is eating cold leftover rice out of a steel bowl with her dirty hands. It is been 15 days since the family arrived from Panipat, Haryana. They had left their home in Madhya Pradesh's Damuh district early last month, taking the train to Panipat. Santosh does Beldaari and his wife helps with mixing and laying the cement. After being paid in counterfeit notes for their labour, they decided to leave Panipat and head to Delhi.

"I have been here for 14 days with no work. I just wait till tomorrow. If I find nothing, I am taking my wife and kids back home," says Santosh.

Back home, Santosh and Kalpana, who are landless, make beedis for a living. Rolling thousands of beedis earns them about Rs 4,000 a month, all of which is spent away. Their only chance of making something extra is their yearly sojourn to Delhi. But this year, even that option is closed.

"In a normal month in Delhi, we would at least have got wage work for half a month. This time there is not a single day's job we can find," says Santosh.

November-March is the peak migration season. It is the time when few have farm work. Those who don't have access to irrigation can't sow rabi crops and so migrate to Delhi and surrounding cities to find wage labour. But demonetisation has seen a trend of reverse migration.

The Indian Express reported Monday that demonetisation has led to a significant hike in MGNREGA workdays across India. "In December, the average numbers went up to 50 lakh per day. And on January 7, 2017, the labour turnout for the day was as high as 83.60 lakh - approaching three times the daily pre-demonetisation average of 30 lakh," the report states.