(News) Political games are not solving problems of Bundelkhand

(News) Political games are not solving problems of Bundelkhand 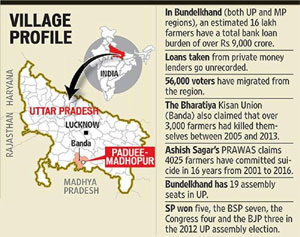 In 2013, farmer Shivpal killed himself. His son, Jagjit, has still not recovered from the loss.

He says, “My father had taken a loan from a government bank as well as a private money lender. He had a bigha of land and three sons, including me. He hanged himself from a tree.”

Shivpal’s suicide was not the first in the twin village of Paduee-Madhopur in Banda district of Uttar Pradesh.

For that matter, the worsening agricultural distress caused by repeated crop failures because of back-to-back droughts in the semi-arid Bundelkhand region has been in the spotlight since July 2006. Kishorilal Sahu had committed suicide then.

The suicide triggered outrage, particularly after a senior district official suggested that Kishori had killed himself because one of his daughters was “characterless”. The insensitive remark made the villagers furious, recalls Ashish Sagar, a drought and right to information campaigner in the region. For some time, the villagers observed ‘chulha bandi’, a strike by putting out the kitchen fire, to protest the farm crisis.

“My husband had around six bighas and a loan of nearly Rs 1 lakh. Owing to crop failure, debt distress and the fact that he had six daughters, he hanged himself,” Shobha Devi, his widow, says. 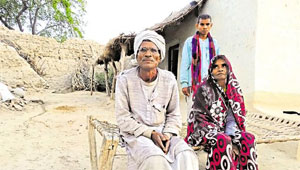 Only about 32% of the region’s cultivated area is under irrigation, but even that fails at the time of drought.

When crops wither, many farmers wilt under debt and despair. There have been six confirmed farmer suicides in Paduee-Madhopur since 2006. There have been two more such incidents but they cannot be attributed, at least directly, to drought. Human rights organisations say the figures are way higher – in thousands. Each time there is an election, politicians land up to promise relief. But villagers think little will change.

Congress vice-president Rahul Gandhi, who was the party general secretary then, visited the village in 2008.

Ahead of the 2009 Lok Sabha elections, the UPA government led by Manmohan Singh announced a Rs 7,266-crore package. Of that, Rs 3,506 crore was sanctioned to the UP part of Bundelkhand.

The package covered 2009 to 2012 initially, but was extended to March 31, 2015 because the state government did not utilise the money within the deadline.