While the Archaeological Survey of India is yet to stumble upon tonnes of gold in Unnao district's Daundiya Kheda village, the department of mineral and mines has 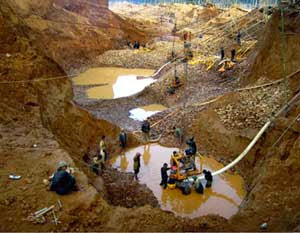 found a treasure trove of metals and minerals in Bundelkhand that could be worth Rs 4,000 crore according to a conservative estimate.

If a report of the department is to be believed, the rocky terrain of Bundelkhand's seven districts — Jhansi, Jalaun, Mahoba, Hamirpur, Banda, Chitrakoot and Lalitpur — could become a potential 'revenue mine' for the state. Sonbhadra in eastern Uttar Pradesh is another place where gold deposits have been found.

The work has been completed at most of the exploration sites. "We've found promising gold deposits in Bundelkhand and Sonbhadra," says Bhaskar Upadhyay, director, geology and mines directorate. The state government has been apprised of the findings and a final report will be submitted soon.

Excerpts from the mining directorate's report — a copy of which is with TOI — show Bundelkhand having not only gold and platinum deposits, but also those of the industrial minerals potash, asbestos and silica worth more than Rs 1,000 crore.

The exploration puts UP on the national mineral map. So far, the state mined only minor minerals such as diaspore, dolomite, limestone, magnesite and phosphorite. This is the first confirmed presence of major minerals in the state. 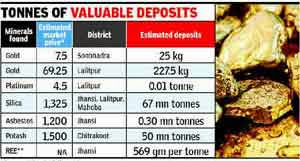 The report shows Lalitpur's Girar-Tori and Khutgawan area in Bundelkhand have gold deposits. The exploration, which began in 1995-96, showed gold deposits along 3.5 km strike length in 2012-13. An estimated 140 kg of gold is present in the area that would fetch an estimated Rs 43 crore (as per gold rate Rs 3,000/10 gm) in the market. Similarly, Berwar in Lalitpur has a reserve of 87.5 kg of gold (worth Rs 26.25 crore).

In Hardi and Bagisoti area of Sonbhadra, where exploration has been completed, samples from boreholes have shown 0.3 gm per tonne of gold. Besides, gold deposits have been found in rocks measuring 1,200 metres in length, 18m in width and 15.5m in thickness. The estimated gold deposit in the area is 25 kg (worth Rs 7.5 crore).

Jhansi is the richest in the pack. The department has found 45 million tonnes of silica (market price Rs 890 crore) in the area that can be used in industries such as iron and steel, ceramics and vitreous tiles.