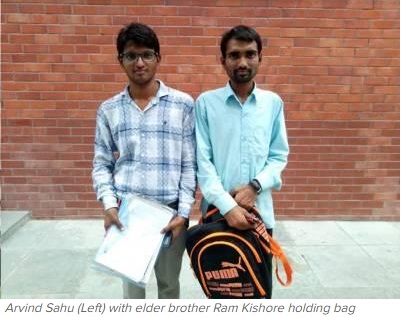 After loosing his father in 2013, Arvind Sahu could not concentrate on his studies as this came as a huge shock to him. At that time Arvind was just 14 years of age. He was supported by his elder brothers who ensured that he studied. But this was not clear to them even that one day Arvind would get admission in premier IIT after cracking prestigious JEE Advanced. This day arrived on Friday when Arvind reached IIT-Kanpur to get his documents verified and take admission in IIT-Roorkee alloted to him in the first round of seat allocation. However, Arvind wants to study BTech Computer Science and Engineering from IIT-Roorkee instead of BTech Civil Engineering branch offered to him.

Accompanied by his elder brother Ram Kishore, Arvind a native of Imiliya village of Hamirpur (drought hit Bundelkhand region), could manage his fees for admission to IIT by sale of the farm produce. Arvind who had secured AIR 172 in (General-PWD) General - Person With Disability category in JEE Advanced 2017 is unable to lift his right arm much since his childhood after he had slipped and caused injury. The doctor concerned had to perform surgery of his arm to give it stability but this caused him disability. His arm does not move freely. But despite this disability and financial constraints especially when none other than Ram Kishore was the only literate, Arvind managed to clear JEE Advanced. Kishore is a science graduate.

Talking to TOI, Arvind informed, "My father was a farmer. He expired in 2013 when I was 14 years of age. He died due to cardiac arrest. My mother is not educated and my eldest brother is just class IX passed. My fees for IIT was paid by my eldest brother Chedi Lal by selling the farm produce. Our source of livelihood is farmland in Hamirpur but as it is already drought hit, it does not give much produce. Now that I have cracked JEE Advanced and come to IITKanpur for document verification I would wish to study further. I have been alloted IIT-Roorkee for pursuing BTech in Civil Engineering branch. I wish to pursue BTech in Computer Science and Engineering."

A passout of Jawahar Navodaya Vidyala in Raath in Hamirpur, Arvind was thankful to God that he could crack JEE Advanced in his second and last attempt and will get a chance to study at IIT which will shape his future. "I am hopeful that my career would get shaped by studying at IIT. I hope then I would be able to support my family and take care of them. My elder brother Ram Kishore has been very helpful to me in terms of giving me guidance. While he could not study beyond his graduation but he ensured that I studied. He took private tuitions and helped me", said an emotional Arvind.