Suneeta is a 27-year-old from Banda district in India’s northern state of Uttar Pradesh. Born a Dalit (untouchable), she left school at the age of 9 and was married at 12. She goes often to Bhagolan, a village that has no water, electricity or roads.

In March 2012, Suneeta wrote about the long delay in highway construction in an article for Khabar Lahariya, a weekly newspaper published in the northern states of Uttar Pradesh and Bihar. The highway was constructed a few months later, reducing travel time to this drought-prone area. 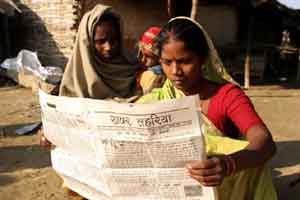 Suneeta is one of 40 rural women who function as editors, reporters, photographers and designers for Khabar Lahariya that literally means ‘news waves’ in Hindi, the language spoken in these two states.

There are many reasons Khabar Lahariya stands out in India’s rich media landscape of almost 70,000 newspapers. To start with, it is the first multi-edition local language rural newspaper run entirely by women, many of whom have had little access to formal education.

“Khabar Lahariya is composed of a collective of rural women journalists, most of them from marginalized communities - in terms of their caste, religion and ethnicity. This collective reports, writes, edits, designs, takes photographs and illustrates for the newspaper and then distributes it far and wide at the end of the week,” says Shalini Joshi, the co-founder of Khabar Lahariya. Shalini is part of the Non-Governmental Organization, Nirantar, and The Women, Media and News Trust (WoMeN Trust), which trains and mentors Khabar Lahariya journalists.

The newspaper is distributed to 600 villages in media dark areas of northern India. It is often the only source of information for its 80,000 readers. “Like its reporters, the readers are also those in media dark areas. We distribute the newspaper to daily wage earners, farmers, teachers, activists, members of the panchayat (village council), village administration, politicians and students in remote rural areas,” adds Shalini.

Over 11 years, the newspaper has grown immensely and is now published in 7 local languages. Khabar Lahariya currently has editions in Chitrakoot, Banda, Mahoba, Varanasi, Lucknow and Sitamarhi. New editions will be launched in Pratapgarh, Lalitpur, Azamgarh and other districts of Uttar Pradesh.

One of the latest stories in the newspaper is about the challenges faced by villagers who have to cross five rivers to reach the nearest town. In the story, Aniriya Devi, Suneel, Ram and Seeta Devi from Indarva village stress the need for a bridge. Another story from Chitrakoot district discusses the negative effects of building a local dam.

“Through the newspaper, we are able to give women access to information they didn’t have earlier. The reporters travel to isolated areas to report on everything from rural infrastructure, water to sanitation,” says Shalini.