The rûh [spirit] which remained uneasy due to separation, the nafs [soul] which remained desirous of the Hereafter, the saint who lived like a traveller as commanded in the hadîth, the epitome of simplicity, the one whose heart brimmed with the love of Allâh, finally bade farewell to this transitory abode on 23 Rabî’uth-Thani 1418 A.H. (28 August 1997) on a Thursday in Lucknow, India. 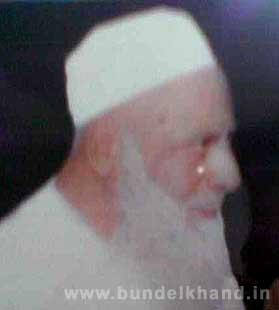 Moulana Siddiq Ahmed wars born in approximately 1341 AH. in Hathora District Bandah. His ancestors had migrated from Mousil iin Iraq to India. He was still very young when his father passed away. His mother made arrangements for him to travel to Kanpur to further his studies. For some reason or the other, he did not partake of the madrasah food.

For the first few days he survived on the food his mother had given him. However, the supply was exhausted after a few days. Thereafter Allâh Ta’âla provided an opportunity for him to earn a meal. One of his teachers asked him to run the errand of bringing some water daily from the municipal tap to his house. In exchange for this errand, he would provide him with some food. For a whole year he survived in this manner on one meal only. In fact, later on, one of his colleagues from Bandah joined him. Now there were two of them partaking of the same ration. A third companion arrived but he could not endure such hardship and left shortly thereafter.

He obtained his initial education including the Qirat course at Panipat. Here he used to have lessons the whole day and night till 1:00 p.m. the next morning.

Thereafter the students were allowed to sleep for two hours and were then awakened for tahajjud. Hadrat used to say that whatever difficult work he managed in later life was a result of the utmost exertion he endured during his youth.

After completing his initial education, he took admission at Mazahirul Uloom in Saharanpur in 1359 A.H. He studied his final year of Hadîth in 1363 A.H. After graduating, he served Dîn in the fields of Tablîgh, Da‘wah and writing.

There was so much poverty in the village where Hadrat lived that the children used to be sent to the fields from the morning. There, they would eat whatever they could find during the day. When Hadrat started Hifz [memorising the Qur’ân], he used to receive some bread. His two younger sisters would also be sent to the pastures and when he intended to share his bread with them, no one would listen to him. The two sisters passed away at an early age. Hadrat's whole life was one of difficulty and agony. Perhaps there isn't a great scholar like him today who endured such rigour.

Opinion of his superiors:

The need for an institute:

The district of Bandah had neither a madrasah, an Islâmic institute worth mentioning nor was there any religious personality that worked there for some time. The religious condition of the people was thus deplorable. A large percentage of the Muslims were Muslims in name only. They had absolutely no relationship with Islâm. After the independence of India, the people of the Shuddi movement began converting these weak Muslims into Hinduism. A wave of irtidâd [reneging from Islâm] swept across the area. Thousands of Muslims left the fold of Islâm.

Moulana was teaching at the Madrasah Islâmiyah in Fatehpur at the time. He had been receiving news about the people of Bandah. One night, as he prepared to sleep, he pondered over the fact that Allâh would not ask him about the books he taught but would question him about his efforts to stem the tide of irtidâd. His sleep disappeared and he spent the whole night in anxiety and concern. Before the morning he had already decided that he would work among his people and worry about their imân. He took permission from the madrasah authorities and resigned. He began travelling to all the nearby villages and settlements to tell the people about Deen. His effort was solo. Sometimes he would spend the night in a bale of hay and sometimes he had to sleep in a footpath on someone's farm. After working for several months in this manner, he perceived the need for a madrasah that could be used as a centre for all the work. The locals were not interested in a madrasah and thus no one offered him assistance. Nevertheless, he worked alone and managed to establish a madrasah in his village. All the villagers were extremely poor. Their homes were made of mud and the masjid was very small and in a pitiable condition. Initially when the madrasah was made of mud, it used to collapse every year in the rain. None of this discouraged him from urging on. He together with some ustâdh and students built the madrasah with their own hands. When mixing the cement and sand, their hands used to bleed. This building not only includes the perspiration of the teachers and students, but also their blood. In this manner he toiled until he established and financially supported approximately one hundred elementary madâris. He was appointed a member of the Shura of Nadwatul Ulama in 1387H (27 August 1967).

Hadrat was an icon of humility. Moulana Zakariyya Sambhali who was an ustadh at Hadrat's institute writes that the uncultured students of the village used to mess the toilets of the madrasah and leave them in an atrocious condition. However, one noticed that every morning the toilets used to be spotlessly clean. No one had any idea who was responsible for this. One morning at about 2:30 a.m., Moulana Zakariyya had to answer the call of nature. When he approached the toilets, he saw a person collecting water from the wudhu khana in a bucket and washing the toilets. On closer inspection he realised it was Hadrat himself. Thereafter Hadrat went to the well and took a bath after which he performed tahajjud salâh in the courtyard of the masjid. Allâh knows best what rewards such a saint could achieve.

Wherever he went, all he carried was a shawl, a bag made of material which contained a jug, a lungi and one set of clothes. Even when he travelled from Bombay to Johannesburg, this was all he carried. People at Bombay airport insisted that he takes an attaché case but he refused.

Hadrat was a model of the pious predecessors in his independence, trust in Allâh, abstinence and piety. Moulana Abul Hasan Nadwi used to urge him not to undergo such strain by undertaking long journeys but he did not submit and this eventually affected his health adversely. His acceptance among the people can be gauged from the fact that thousands of people from far and wide came to attend hid funeral. May Allâh Ta’âla shower his grave with nûr Âmîn.

maulana qari siddique saheb was the khalifa of maulana asadullah saheb. who was the sadarul mudarris of the mazahir uloom saharanpur and khaleefa of maulana thanwi rahmatulla alaih