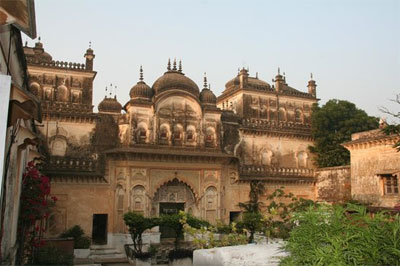 Bundelkhand wrapped in myths and history nestles in its fold, several Forts which offer unique opportunity to experience the Royal grandeur of erstwhile Rajas and Maharajas. One such fort is the Rampura fort that stands majestically as the back drop of the village Rampura Stoically defying its decadent grandeur that time has wroth. Its sheer magnificence lies in the way it has been built on the rugged terrain of Bundelkhand. It was built by the Kushwaha Rajputs. One fourth of the fort has succumbed to the erosion of time and one half of the fort is the living quarters of the present owner who plans to open the fort to visitors who want to experience a few days of feudal rustic living surrounded by the silence of the ravines and forest. Keshwendra Singh is the present resident of this fort and has taken on the mammoth task of its maintenance. Laboriously endeavoring to set up a few rooms as Heritage Home Stay to begin with, where guests would have a different kind of experience. A drive through the forest and visiting the ravines which at one point of time was the hiding place of Dacoits. A boat ride to the confluence of five rivers, a visit to the neighbouring fort of Jagmanpur and to the village to experience the rustic ways of the Bundelkhand dwellers. At sundown an evening with the folk dancers and their legendry folk tales for entertainment.

Historically Rampura has been and continues to be the base for the leader to the Kachawa clan of Rajputs of this area. The are is referred to as Kachawagharh. The former home of the clan was at Narwar, where they ruled till 1129. Tradition relates that Raja Dulha Rai of Narwar had two sons. The elder son, Baikul Deo, remained at Narwar and his descendants later shifted to Lahar in Madhya Pradesh and from there to Rampura. The younger brother moved towards Rajasthan to later establish his empire at Amber and Jaipur.

The Kachwas who moved to Rampura defeated the Meaus, the original inhabitants of the area. The Bhairoji temple (the Kuldevta for the Kachwas) was thus built in the center of the old fortress which was at the edge of the river Pahuj (a tributary of the Jamuna). However, the present Rampura Fort is not built along a river. Tradition relates that on the spot of the present fort a goat had chased away a wolf and hence found to be an auspicious sign of strength and valour, and the venue was shifted. Rampura takes its name from Raja Ramshaha who first built the fort, about 600 years back. Though successive generations have made additions to the structure, the fort still stands strong.

Topographically being a ravine area, the major occupation of the Kachwas, in the past, was being mercenary soldiers, recruited most often by the Gwalior State. As a result, the Rampura State was a tax free state. The area of the state originally consisted of 52 villages, which extended from present Madhya Pradesh to the borders of districts Jalaun, Etawah and Aurraiyya.

The history of the Kachwa clan though being over 900 years old, the Rampura fort in itself bears testimony to the glory of a greater part of these years. The first recorded holder of the title to the kingdom was Raja Jaswant Singh, who got his sanad from Emperor Jehangir in 1619. This title was there on recognised by the British Government. A khilat of Rs. 5000/- was also given to Raja Man Singh. It was during the British period, that the extent of the state was reduced to 28 villages. These boundaries were honoured till the last ruling king, Raja Chittar Singh. The present incumbent Raja Samar Singh owns the fort.

DESCRIPTION OF THE RAMPURA FORT

The total land area of the fort inclusive of the built up area is ten acres.
The fort is constructed of bricks and limestone mortar.
It has split- level design of 4 stories. The fort has about 100 rooms, which include the zenana area (women section), mardana are (men section).
Stables, garages, servants quarters, cattle sheds, wells, granaries, temple, courtyards, rampart walls are spread over the fort area.
The fort is surrounded by a moat, which is presently being modified for fisheries.
Despite its age (600years), the present owners are still using the fort. However some areas do require repairs.
The fort overlooks the ravines. Ravines are a unique topography that can be both thrilling and adventurous for any tourist. Various safaris (horse, bullock cart and camel rides) can add to the excitement.

The nearest railhead is Orai, 55 kms from Rampura.
The nearest station for trains from Delhi is Kanpur (155kms) and Jhansi (160 kms).
Rampura is connected by road to Agra (200 kms), Gwalior (150 kms) and Etawah (100 kms).
Gwalior, Agra and Delhi are connected by air service to the rest of the country.

OTHER PLACES OF INTEREST NEAR RAMPURA

The Pachnada is an area where the tourists can witness the confluence of five rivers, Kunwari, Pahuj, Jamuna, Chambal and Sind. It is an ideal sport for boating and fishing.

There are various temples which date back to antiquity and till today play a vital role in the lives of the local people. The Karan Khera Temple was patronized by Raja Karna of the Mahabharat. The Bhairoji Temple is the kuldevi of the Kachawa Rajputs of the area the Deokali Temple is a Shakti Temple on the way to Aurraiya, picturesquely placed in the ravines.
Anyone interested in spending a few days in the interiors and experience an enriching and a different environment may contact the address below:

Activities : Boating on the river, Camping. Visiting nearby sites.