(Article) SAPNA: An Unfinished Dream, Story about the Migrant Children from Bundelkhand

(A True Story about the Migrant Children from Bundelkhand) 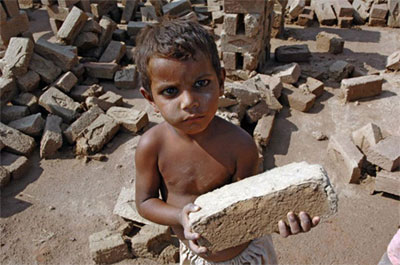 While jogging on the roadside, one summer morning, I noticed some ragtag children near an under-construction building. They were throwing stones at each other. I paused to stop them from playing in this manner, so that they were not accidentally hurt. I found these children to be of migrant labourers, who were living in recently-sprouted shanties on a vacant land of Delhi Development Authority. These children were shabbily clothed and with layers of dust on their tiny faces. Some of them were real mischievous- ever ready for a prank. However, there was something magnetic in each one of them. It was either their unadulterated innocence or their effervescent, carefree manner.

After a few days, I interacted with the parents of these children as I was curious to know about the education of these kids. Majority of these migrant labourers were from Bundelkhand region, which lies in the states of UP and MP. As told by these labourers, only a couple of these children had actually been to a regular village school- that too briefly. Since their parents had to regularly migrate after every four to five months from their respective villages to the greener pastures such as Delhi, these kids were forced to quit schools and accompany their poor parents. Sapna was one among these kids, facing the similar fate. Her mother was also going for work a labourer. Therefore, the responsibility to look after her one year old malnourished, perennial cranky brother rested solely on Sapna, for the entire working day.

As I discussed this situation with my wife, she assured that she would contact an NGO, she knew. This small but sincere NGO was working towards providing basic education to the children of street and those of migrant labourers through mobile schools. Owing to an extremely positive response from the founder of this NGO, a small makeshift classroom was promptly created in the vicinity of the shanties. NGO also appointed a qualified female teacher, who was in desperate need of a job. All the parents were persuaded and motivated to send all of their children who were five years and above, to this mobile school. Initially, Sapna’s parents were reluctant to send her to the class because she had to take care of her brother in her parents’ absence. This was a challenging situation for us. However, we found the solution. Sapna could bring her younger sibling to the classroom. To keep her younger brother engaged, we brought some toys for the little child. Overall, this arrangement worked perfectly on most of the days. Occasionally, Sapna had to be distracted to pacify her brother, when he started crying. Now Sapna’s parents were satisfied and were as keen as other parents to send Sapna to the class.

Everyday, all the children showed unexpected eagerness to come to the class. One reason for this enthusiasm was the incentive in the form of books and stationery items, which they were promised by us. These were real big gifts for these poor urchins. When elementary books and slates were distributed among these kids, their eyes sparkled like little diamonds in the mines. In our spare time, my wife and I used to go and supervise the classroom proceedings. We observed that these children were just like cooking gas. If you show a little spark, it would give you magnificent blue flame. If you don’t, this highly volatile gas will spread and can burn your kitchen. These children also deserved a spark in the form of our affection, sympathy and guidance.

Within a few days, their unexplored and raw talent was clearly visible even to our bare eyes. If one child was good at singing, the other was creative in making beautiful lamp shades from the waste paper. Someone appeared to be a good football player. Each one of these children was uniquely gifted. Unfortunately, their abilities seemed to be buried deep under the tremendous weight of their poverty. Sapna was an excellent learner. Whatever basics her teacher taught her so far, her thirsty mind, like a piece of sponge, absorbed everything quickly. Though, every class session, she was multi-tasked- to pay attention to what her teacher was teaching and to simultaneously look after her little sibling. One of these days, we tried to sow the seeds of dreams about their future in their fertile minds. When asked what they wanted to become when they grow up, their answers varied from an absolute blank stare to a confident ‘Police’. Sapna was very clear in her mind. She wanted to be a teacher. Every time a child said something, we sincerely prayed for their fragile wishes to survive and get fulfilled.

Three months passed and there was a definite improvement in every child in terms of understanding Hindi and English alphabets, reading simple sentences in Hindi and performing elementary arithmetic like addition and subtraction. Apart from academics, we were able to inculcate basic class room discipline and quite a few essential things related to their hygiene such as cleaning their teeth, clipping their nails, washing their hands and taking bath regularly. Things started to look positive. The kids were also enjoying learning in the makeshift ‘school’ environment. Once a week in the evening, I used to take them to a nearby public park, where all of them including girls would play Football, Frisbee or simply race. Kids enjoyed it to the fullest and so did we, in the atmosphere filled with their innocent giggling and playfulness.

One day, while coming back from my office, I noticed two tractors with trolleys parked near our makeshift classroom. There was no sign of any shanties. I found that the migrant labourers were loading their belongings onto the trolleys and their wards were helping them. I asked one of the labourers what was the matter. He replied, “ Babuji, yehan ka kaam khatam ho gaya hai, isliye hum yehan se kahin aur jaa rahe hain.”(Sir, our job at this place is over, so we are moving to some other place). I was certainly shocked. What would happen to these kids? Would they be able to continue their education? After all, they were picking up quite well. So many depressing but obvious questions clouded my mind. I obtained the cell number of the labour contractor who was taking them to some other place. I asked him if these labourers could get jobs in some nearby localities. I told him the reason for my earnestness to retain these labourers and their children in a close by place. The labour contractor very politely replied that he got a new contract for providing labourers to a construction company at Faridabad and all these labourers would get good wages there. He also told me that he was aware of our mobile school and that he sincerely appreciated it. As transpired by him, these labourers were themselves willing to go to Faridabad so that their livelihood continues. It was a very valid reason.

Trolleys were loaded. The migrant labourers and their children were ready to move. I was extremely sad and genuinely concerned about the future of these children. The flicker of hope about their future which we noticed in these kids was about to be snuffed out by the compulsions of their poor parents. Perhaps, the question of immediate survival of these poor families consumed the answer for a dignified future of their next generation. The children were saying goodbye. Sapna also waved her little hand. Sapna means dream in Hindi. Her dream was to become a teacher. I am not sure if her dream will ever be fulfilled. In all probability, most of these children would never be able to go to a school. Even if they manage to go, their joy of learning in school and their presence will be ephemeral due to the frequent movement of their poor parents in search of livelihood. Also there are chances that some of these children would end up working as labourers themselves, sooner than later. I stood there with this depressing but real question still lingering in my mind and soul. I didn’t know the answer as a commoner. May be some people in India already have an answer.