If we analyse the inter-district variations on the basic demographic indicators of MP, we will come across various interesting deviations (table 2.2). Datia is the smallest district of MP and is smallest in the population size also. Its population comprises of 0.59% of the total population of the state Raipur district of MP has ten times bigger population than that of Datia. Out of the five districts, under study, Satna has the largest population, followed by Chhatarpur.

As far as the population growth rate is concerned for the last census decade, Chhatarpur showed the highest growth of 30.61% followed by Tikamgarh with 27.66%. It is interesting to note that Chhatarpur occupies the central place on the Bundelkhand plateau and is typical of the regional culture. It is also worth noting that districts adjoining Chhatarpur, like Panna in the east and Tikamgarh on the west have also shown higher decadal growth rate than the farther districts, like Datia and Satna. The total fertility rate (TFR) has also shown exactly the similar trend with Chhatarpur showing the highest of 6.6 per women, followed by Tikamgarh and Panna with 6.1 and 5.9 children per woman respectively. Satna registered the lowest growth and TFR, from among these five districts.Density of population shows the reverse trend. Satna which registered the lowest decadal growth rate of the five districts, has the highest density of 195, followed by Datia and Tikamgarh. Chhatarpur has shown one of the least density with only 133/km2. Panna has a special case with the lowest density of 96 because of its large forest cover where population is very scarce. Only Chhatarpur and Panna has the density which is lower than the average of MP Others have much higher densities than the state average.

All these districts have a lower urban population in comparison to state average. Among the districts, Datia has the highest percentage of urban population which is 22.45%, followed by Satna with 19.73%. Panna has the lowest urban population, that is only 13.02%. So far as the sex ratio is concerned, all the districts have it much lower than the state average. Satna has the highest of 918 females per 1000 males. Datia has the lowest of 847, followed by Chhatarpur with 856 females per 1000 males. There might be reasons behind Datia having the lowest sex-ratio among these districts. One of them is that Datia is the part of Gwalior-Chambal division which records the lowest average sex-ratio in the country due to various socio-historical reasons. It has been a Rajput dominated, Decoit-infested region where girl-child is very much neglected, at times to the extent of infanticide.

Infant mortality rate in northern MP districts is much higher than the state average. The highest among these districts has been recorded at Tikamgarh with 195 per 1000. It has been followed by Panna and Chhatarpur with respective figures of 185 and 182 per 1000. Datia has the lowest amongst these with the figure of 156, which in itself is a high rate. 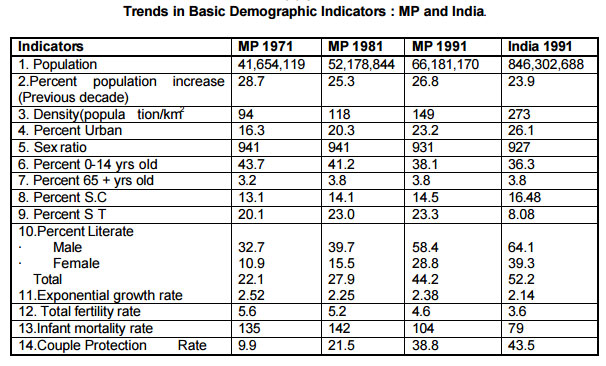