In Bundelkhand, at the top of the social, hierarchy are the castes like Rajputs Brahmins,Kayesthas, Jains  and Banias, who have the control either over the major chunk of land holdings or on the trade and business. Naturally, they have been influencing the politics  of the region from the beginning. The middle castes like Lodhi and Yadavs are now emerging on the political scene after the ‘mandalisation’ of politics. The Scheduled Castes are getting organised now under the banner of Bahujan Samaj Party (BSP) and have shown their political strength in Satna Parliamentary Constituency in last election (1996) which BSP won. But still the ‘unholy trinity’ of landlord, money lender and trader continues to hold the centre stage of politics and money and muscle power rules the politics.

The concerned districts of northern MP don’t fall under a single parliamentary constituency (see table 1.5). They are divided into Bhind, Khajuraho, Damoh and Satna constituencies. In all these constituencies, most of the times the member of parliament has been from the upper caste. Partywise the fight has been most between Congress and Jansangh/BJP. But in the beginning of Parliamentary democracy, and in early elections, Samajwadi/Socialists leaders, under the banner of Praja Socialists Party, Samyukta Socialist Party or Socialist Party, have made their serious presence felt in the region. Even today, a large number of leaders in this region owe their birth under the socialist parties. Socialist present was felt till 1971 parliamentary election and later on it merged with Janata Party. Jansangh made its
clear influence from the very beginning in this area. In Bhind, Jansangh won the parliamentary elections as early as in 1967 and 71 and continuously from 1989 onwards under the banner of BJP. In Damoh also BJP has ;taken over the Congress from 1989 elections onwards. What is interesting in Khajuraho parliamentary constituency is that from 1980 onwards, it is being represented by one or the other female member in parliament. Initially it was represented by congress member Mrs Vidyawati Chaturvedi and now (1989 onwards) by Ms Uma Bharati of BJP. Satna represents the emergence of Bahujan Samaj Party (BSP) which won it in 1996 elections. BSP became a third power centre (apart from BJP and congress) from 1991 elections onwards. Not only in Satna, but in all the constituencies of the Bundelkhand and Vindhya, BSP is becoming a major political force. Vidhansabha (Legislative Assembly) elections represent the true picture of local power relations. Among all the districts, Sewda in Datia, Khargapur in Tikamgarh, Maharajpur in Chhatarpur, Amanaganj in Panna and Raigaon in Satna, are the reserved Vidhansabha constituencies for SC. Interestingly, all these reserved seats except that of Amanganj in Panna, are presently being represented by BJP. But congress is still the largest party in terms of representation of legislative seats of theses districts, put together. In Datia, though, BSP has made its presence felt from 1990 elections onwards, it has not been able to win the seats. In Tikamgarh, Newari has interesting record. It has never elected a Jansangh/BJP representative and was the witness of socialist influence in early days of democratic elections. It has the tendency to go against ruling party and is the only constituency in the region which is being represented by Brahmin, except once by a Yadav and a Thakur. Similarly, Tikamgarh legislative constituency has almost always been represented by a Thakur, mostly under congress party. Jatara had the influence of socialist in the beginning but they never came to the mainstream politics. At present, it is being represented by Congress defected BSP member. BSP is trying to organise scheduled castes/backward castes/muslims/tribes into a political force.

Chhatarpur district has four legislative constituencies and three of these are being represented by Congress. The major power blocks are Congress and BJP. Socialists (Samajwadis) lost ground after 1970s and BSP is trying to make a stronghold. So at present only existing two major parties are fighting with each other. Bijawar constituency and Chandla, as well, has seen most of the time a Thakur or a Brahmin getting elected to the legislative.

In Panna, all the three seats are being represented by the Congress. Jansangh/BJP has been active in the district since early 60s. In 1962 election they won the Pawai seat. Samajwadis, though present, never posed a threat to congress.In district Satna, there are 7 legislative constituencies. Three are being represented by BJP,two by Congress and two by BSP. In the early years, a party named Ram Rajya Parishad was very active in the district, particularly in Maihar and Chitrakoot constituencies. Jansangh and Socialists were also active. Now the Congress and BJP are trying to balance the politics of the region. Thakurs still have the hold in the politics, particularly in Maihar, Nagod and Rampur Baghelan. 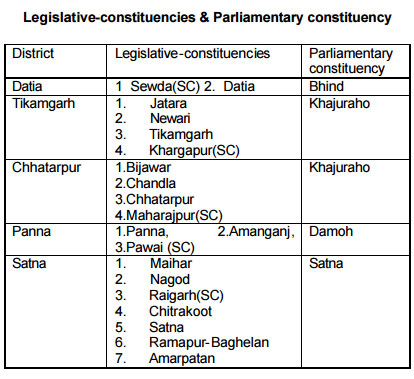 Overall, politics in Bundelkhand and northern MP is presently centred around higher caste sand higher ups among backward castes. The tassel is between Congress and BJP with BSP fast emerging as a third force. The congress and the BJP have almost the same vote banks. Most of the time it is the caste of thecandidates and the ground work done by the party workers,that makes one victorious. Muscle and money power have always played a role in politics.The feudal nature of Bundelkhand makes it more severe. Politics in this region is highly criminalised. Social issues, concerning the mass, is always marginalised and election are fought only to represent the region, not the people in true sense.