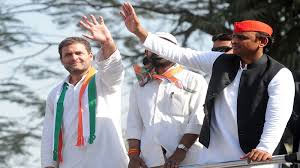 The drought-prone Bundelkhand, one of the most backward regions of Uttar Pradesh, is a place where development has dominated the political discourse during the election campaign. While the BJP has attempted to highlight the failures of Akhilesh Yadav government in this region, the latter has pointed to the Central Government's inability to keep its promises and help address the backwardness of the region. That Uma Bharti - the high-profile Union Minister for Water Resources in the Narendra Modi Government - is a key face of the BJP in this region, has given an opportunity to Samajwadi Party-Congress alliance to claim that Bundelkhand's water woes continue even when she is in a position to find a long-term solution to the problem.

"When Bundelkhand needed water last year... when there was an acute water crisis here...the central government sent an empty train," Akhilesh Yadav said at a political rally he addressed jointly with Congress Vice President Rahul Gandhi in Jhansi on Sunday. "If we come to power, we will give new opportunity of growth and development to the people in this region and more employment opportunities to the youth," he claimed.

The Bundelkhand area has been suffering from drought for many decades, with the last three of the five years being drought-hit. As per the data available with National Crime Records Bureau, between April 2003 and March 2015, a total of 3,280 farmers committed suicide in the state. Over the years, Bundelkhand has seen many of those deaths.

In his address at the SP-Congress joint rally in Jhansi, Congress Vice President Rahul Gandhi said, "I went to meet PM Modi some time back. I told him the farmers were committing suicides. But he kept silent."

Farmers' debts, said the Congress vice-president, "should be waived and their electricity bills reduced".