(Article) A Ray of Hope For Dry River in Bundelkhand

A Ray of Hope For Dry River in Bundelkhand 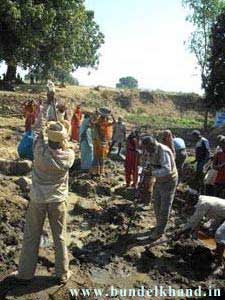 In Bundelkhand region 100 years back, Bargarh was known as tribal area situated in between the dense forest. This area is known for lions in early year. The health level of tribal’s is known to be good in those days and the tapping of the minerals is supposed to be very less in those days.

Today there is lot of barren lands which is spread throughout miles and there is lot of availability of silica mines is in this land. These mines are considered as acwrn for poor hungry tribal people.

These mines are also responsible much in term of infection of TB and silicosis.

In early age they have no relation with primary education and they didn’t want to educate themselves for better lives.

Despite of their daily struggle, they are not capable to get their sufficient food.

Dryness is the main disaster of this area. Here a day’s some tribal communities from past 10 years are successful to do agriculture based livelihood activities based on rain water. But lack of rain as usual nowadays wells, ponds of the villages are dried and this is not a natural means somehow the communities is responsible for that type of condition.

Based on average ratio ample amount of water is used in Silica mines industries and the selection of crops by the people which demand more water in nature. On an average ratio 20% people of society involved in these type of process.

It’s about 82 year from freedom, when reins of the whole country came into the hand of Indian government.

It’s not a saying if we analyze that from 1947 to 1982 government is merely involved in chaffering of the trees.

Till now days trees that has been surviving is also chopping down by the collusion of forest mafia and forest department.

The total population of Bargarh, Gahur area is comes under total 18 villages assemblies. The future of children comes under these village assemblies is somehow over day by day due to river droughty condition.

Today on average ratio 99% tribals is lending money from the local tradesman to buy their daily bread.

Singashrot is known as the source of water where lion was living-The place known for innumerable streams-But from last five years Singashrot is suffering from dryness and it’s on a verge to convert as a droughty source.

This Singhasrot is also known as the source among 40 families of Satyanarayan nagar on which they are depending to cultivate their bountiful crops. 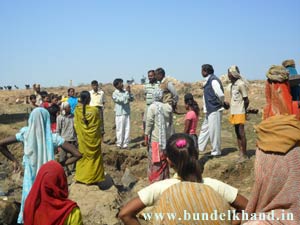 Now days every people of this village are owe to someone due to not proper implementation of NREGA to sustain their livelihood. People living here are not getting advantage of NREGA from past one year.

Girls deprived from school education and about boys they are not able to read up to eighth standard due to hunger situation.

Here the women and children whom are suffering from debt are initiated the process on dated 17-2-2011 of awakening the river to come out from hunger situation.

In the beginning of work there is group of few women, children and old men who started the work.

Gradually some other groups came and joint this movement in work of emerging soil from the river.

Till now they will able to find out small- small sources of water stream.

Seeing come out water people are very happy and they are carrying forward this effort with great confidence and hope day by day.

Communities formed one "Bal Awaz Cell'for the sake of forest and river protection.

I opened your page from a Facebook message and I am so proud of your people. You are poor but you have come out to change your own lives. I live far away in the UK, but I wish I was with you and I could also join the digging and the lifting of the mud. My best wishes for your work. May you have great success.