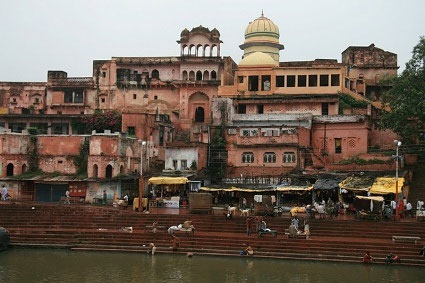 This famed pilgrimage town is 8 km south of Karvi town near Banda on the road to Allahabad. It is quiet, tranquil place, located on the northern end of the Vindhyas. According to legend, it was the abode of Lord Ram and Sita for 11 years during their exile. This is the place where sage Atri and Anusuya lived. It is set in the picturesque surroundings on the banks of the Mandakini river.

Situated on the bank of the Mandakini, this Ghat is the most frequented one in Chitrakoot. The evening arti performed here is particularly worth seeing.

1 km from the city, the ghats that line the banks of the River Mandakini reveal ongoing religious activity. Here, amidst hymns and the sweet fragrance of incense, holy men in saffron robes sit in silent meditation or offer the solace of their wisdom to the countless pilgrims who converge here. With the very first rays of the sun that gleam upon the river, Ram Ghat stirs into life. Devotees of all ages take the ritual purifying dip in the waters and invoke the blessings of the gods. The activity builds up to a crescendo of colour and to spontaneous expressions of faith through the day. The evening “Arti” at Ram Ghat is a unique experience for the devotee as well as for the tourist.

This sacred hill is of great religious importance and is believed to be the original Chitrakoot. The Bharat Milap Temple is located here. Circumambulation of Kamadgiri is the most important ritual for the pilgrims who come here to seek blessings.

Two immense rocks mark this picturesque spot. It is believed to be the place where Lord Rama and Sita used to sit and watch the beauty of Chitrakoot's serene surroundings.

One of the most revered places located on a steep hillside. It is approachable by a flight of 360 steps. Here, the waters of a natural spring fall on an idol of Lord Hanuman.

An unusual cave over the Mandakini river, it is said to be the place where Goddess Sita used to bathe.

3 km from Chitrakoot this cave over the Mandakini has always astounded visitors. It is said that Sita took her bath at this spot during her stay at Chitrakoot.

This is a tiny rivulet which flows into a tank at the end of an underground cave. The source of this rivulet remains a mystery. It is believed that Lord Rama and his brother Lakshman held court here during their exile.

It is a worth visiting place, where different aspects of Lord Rama are attractively exhibited through sculptures.

13 km from Chitrakoot, the Sati Anasuya Ashram is located further upstream. It was here that Atri Muni, his wife Anasuya and their three sons (the three incarnations of Brahma, Vishnu and Mahesh) are said to have meditated. The Mandakini is believed to have been created by Anasuya through her meditation. A winding road through densely wooded hills leads to the spot.

Located on the left bank of Paisuni, Sitapur is intimately connected with both Chitrakoot and the sacred hill of Kamtanath, which is just 2 km to the south west of the town. Pilgrims first bathe in the Paisuni River at Sitapur and then move on to do the parikrama of Kamtanath. Originally the town was known as Jaisinghpur. In 1739 AD, Aman Singh, Raja of Panna gave Jaisingpur to Mahant Charan Das, who changed its name to Sitapur in honour of Sita.

Located 11 km from Chitrakoot, on the Karvi-Devangana road, near the Banki Siddhapur village, is Ganesh Bagh. Here an exquisitely carved Shiva temple, ruins of a residential palace and a seven storied baoli built during the reign of the Peshwa Vinayak Rao, stan in mute testimony to the splendid forms of art and architecture that once flourished in this area.

Just 38 km from Chitrakoot, is the village where Swami Tulsidas, the illustrious poet of Ram Charit Manas, was born.

18 km from Chitrakoot lies Bharat Koop believed to contain the holy waters of the sacred rivers brought by the younger brother Bharat, to celebrate the rajabhishek (coronation) ceremony of Lord Ram.

Road : It is well connected with the main cities of U.P. and M.P.