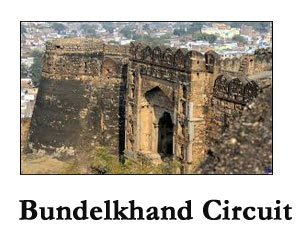 Majestic forts, magnificent temples, abundance of sculptures, ancient lakes filled with historic tales, pilgrimage sites from the Ramayana, a huge display of rich cultural and much more to keep you busy. Bundelkhand is a perfect place to forget the world, where you unwind and drown yourself in the depths of culture and history, undisturbed by modernity.

It lies in the heartland of India, with some part in Uttar Pradesh and in Madhya Pradesh to the south. The region known as Bundelkhand is today identified with the districts of Jhansi, Lalitpur, Jalaun, Hamirpur, Banda, Mahoba and Chitrakoot in Uttar Pradesh; and Sagar, Chhatarpur, Tikamgarh, Panna, Damoh, Shivpuri and Chanderi in the adjoining state of Madhya Pradesh.

The major dynasties in Bundelkhand were those of the Chandelas and Bundelas. Bundelkhand emerged from the mists of history during the 9th century under the rule of the mighty Chandelas. The Chandelas governed the destiny of Central India for nearly 300 years. Six centuries later the Bundelas rose to power and they also commanded great influence in the region in the 17th century under King Bir Singh Judeo (1605-1627) of Orchha.

Centuries later, it was during the first uprising against the British rule in 1857 that Bundelkhand produced another charismatic leader in the fiery Queen Rani Laxmi Bai of Jhansi. She led the rebel forces in revolt against the British in 1857 and sacrificed her life for the cause of India's independence.

The landscape is rocky with sparse forests, but major rivers – the mighty Yamuna, Betwa and Ken traverse through the region. Lakes, waterfalls, reservoirs, dams, caves and mountains are as much a part of Bundelkhand's attractions, as are remarkable forts, fortresses, temples, shrines, huge statues and edifices.

Bundeli food is any gourmet's delight. A special attraction being the mouth­watering combination of Urad Dal and Bada, a lightly fried Urad Pakora soaked overnight in water, Bada is garnished with mustard and served with a Chutney.

Bards still sing the praises of the saga of Allha and Udal, legendary brothers who sacrificed their lives for the honour of their land. The Allha-Udal style of singing is famous the world over.

Mahoba is known for its popular paan (betel) leaves. Chitrakoot offers the visitor a variety of trinklets and ritual items on sale. Silver fish from Mahoba and metal chariots of Jhakhora are specimens of Bundelkhand craftsmanship.