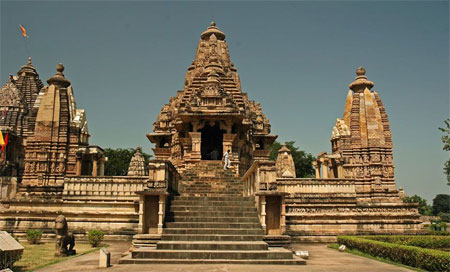 Deogarh is situated on the right bank of the Betwa river, at the western end of the Lalitpur range of hills. It is of great antiquarian, epigraphical and archaeological importance. It remained in glory during the reign of the Guptas, the Gurjara-Pratiharas, the Gondas, the Muslim rulers of Delhi, the Marathas and the British. Here one finds the remains of a magnificent Lord Vishnu Temple, dating back to the Gupta period and several Jain temples. The architecture and sculptures of these temples display a high level of craftsmanship.

This fine temple of the Gupta period, dedicated to Lord Vishnu, is the earliest known Panchayatan temple in north India. The figures of the Ganga and the Yamuna adorn the carved doorway leading to the sanctum sanctorum. The carved panels along the side walls depict scenes from Vaishnava mythology.

There are 31 Jain temples, all situated inside the Fort of Karnali, on the hill overlooking the river Betwa. The site was a Jain centre from the 8th to the 17th century.

The museum has a fine collection of sculptures. Other attractions are Nahar Ghati, Raj Ghati, Siddha Gufa on Betwa river bank within the forest.

Deogarh offers some breathtaking sights to visitors. Among them are the rock cut caves at Siddha-ki-Gufa. It is a plain cave, located on the cliff wall to the left, along the descent from the Naharghati. The cave depicts, on its right, an image of the goddess Mahishasurmardini. It is among the three valleys which provide approach to the Betwa River, the other two being Nahar Ghati and the Rajghati. The Naharghati at the east end of the fort has steep steps that go down from the fort to the Betwa River. Naharghati and Rajghati have rockcut lingas and various deities statues, but the sculptures are small in an unfinished state. Matrika statues (seated) are also important archaeological finds at the Naharghati and Rajghati sections, as they represent early sculptural activities in the 6th century.

This temple, although in ruins today, tells the story of its magnificence and grandeur. It is dedicated to Lord Visnu’s Varah incarnation. It is situated in the fort.

This temple is a protected monument, devoted to Lord Krisna and situated in Dhaujari village on the bank of the Betwa river.

About 30 km from Deogarh and 5 km from Dhaujari is this cave complex. These natural caves are situated in the valley of river Betwa and are visited by many pilgrims and sadhus. It is believed that a famed sant Muchkund lived and meditated here and legend has it that Lord Krishna too visited here during the Mahabhart era. It is approachable by forest road via village Dhaujari.

The group of 31 Jain temples, though of a later date, are no less remarkable. The site was a Jain centre from the post-Gupta times up to the 17th century. Panels depicting scenes from Jain mythology, Tirthankara images, a Manastambha (votive pillar), Ayagpatta (votive tablet) Sarvato bhadra pratima (Jaina images visible from all sides) and Sahastrakuta (pillar carved with a thousand Jaina figures) are found here.

A town that is famous for its gossamer Chanderi saris has also some of the finest examples of Bundela Rajput and Malwa Sultanate architecture. A magnificent Mughal fort dominates the skyline of this interesting old town.

Among the sights here are the Koshak Mahal, an old palace said to have been commissioned by Mahmud Khilji in 1445, the Badal Mahal Gate - a victory arch, the imposing Jama Masjid, the Shahzadi ka Rouza, a building with decorative arches and the Parmeshwar Tal. Chanderi has also a number of ancient Jain Temple.

25 km. There is an ASI protected Neelkantheshwar Mahadev Temple on a hillock, having a three headed unique Shiva sculpture each in a different aspect of Lord Shiva. The place is also known for betel growing.

5 km. from of Dhaujari and 30 km. from Deogarh it is approachable by forest road. Natural caves which are situated in the valley attracts sadhus. It is believed that Saint Muchkund lived and meditated here and Lord Krishna had also visited here during the Mahabharat era.

A 56 feet high rockcut sculpture of Narsimha Avatar is carved in a hillock in the forest area 40 km. from Deogarh.

55 km. It is a big water reservoir on Betwa River.

Road : Deogarh is connected with regular bus services from Lalitpur and other parts of the state.