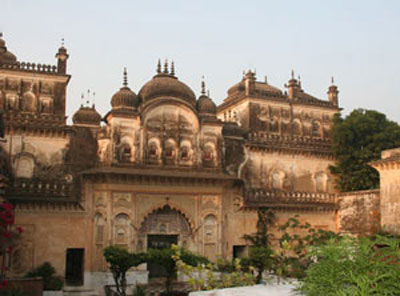 This district lies between Etawah and Kanpur. On its north flows the Yamuna river, on its southwest it adjoins Samthar in the district of Jhansi. To the southeast, the river Betwa divides it from Jhansi and Hamirpur. It is said the place derives its name from that of rishi Jalwan who lived here in ancient times. Previously it was in Allahabad division but in 1911 it was transferred to Jhansi division. There are four tehsils by the name of Jalaun, Konch, Orai and Kalpi. The Yamuna, Betwa and Pahuj rivers nearly encircle it.

Its earliest inhabitants were probably Bhils and similar tribes. Its traditional history from the earliest times to the end of Mahabharata war is mainly gleaned from the Puranas. The earliest known traditional ruler of this region was king Yayati. During the 16th century, Jalaun seems to have served as the halting place between Delhi and Bengal.

About 30 km west of Jalaun, the place has numerous ancient temples and ruins. It is said to the birthplace of Chamund Rai, the famous commander of king Prithviraj Chauhan. Many traditional fairs and festivals are held here round the year.

It is the district headquarter town of Jalaun. The place has great historical importance and the temple of Ram Lalla which has a huge image of Hanuman draws a large number of devotees. A big fair known as Saawn Mela is held every year.

Fort Rampura stands proud defying the ravages of time atop a small hillock deep in the Chambal ravines. After being in the family for fourteen generations, Raja Samar Singh and his family now offer Fort Rampura as a unique homestay destination for guests who wish to experience the feudal and country life of Bundelkhand. This 600- year old ravine retreat provides an ideal ambience for a weekend getaway and a place to relax and unwind for the travel weary. It has been renovated to provide the most modern facilities to guests.

At a distance of just 15km from Rampura is Pachnada (an area signifying the confluence of five rivers – Pahuj, Kunwari, Sind, Chambal and Jamuna.). For the energetic, visits to nearby forts of Jagamanpur, Gopalpura, Sewanda etc can be arranged subject to gaining permission from the owners. For guests keen to see handmade paper factories and local carpet weaving units, a picnic to Kalpi (80 kms from Rampura) can be organized

Chaurasi Gumbad, or 'Eighty-four Domes', and said to be the tomb of Lodi Shah Badshah is located in Jalaun. The building has a high central dome on a square drum. This is echoed by a smaller cousin and an engaged battered bastion at each of the four corners. There is a pyramidal square kiosk at the centre of each side, with seven arched openings recessed in three planes on each face of the single-storey tomb. It is built in Islamic architecture as a square nine domed structure in a walled courtyard with two graves under central dome. The probable date assigned to this monument is late 15th or early 16th century. It has 84 door arches. Built of blocks of rubble the whole building is divided into square spaces as in a chessboard, by eight lines of pillars that are linked by arches and topped by a flat roof. The building has a dome of a height of 60 feet. Jaunpuri motifs can be seen in the wall of the Gumbad. It is located to the west of old Kalpi along with NH 25 towards Orai. Behind Chaurasi Gumbad there are more than 50 old Muslim tombs, belonging to Sayyd and Lodi Dynasty.