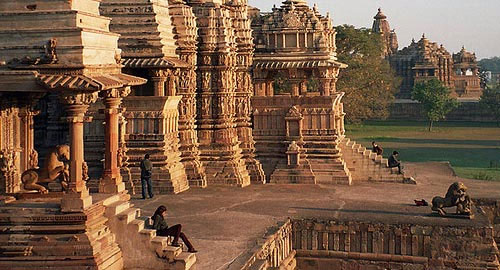 Situated about 280 km from Jhansi, close to Banda, this fort town had strategic importance during medieval times. The ramparts of this fortified architectural marvel is pierced by four gateways, only three of them; the Kamta Dwar, Panna Dwar and Rewa Dwar exist today. Dotted with several architectural and sculptural marvels, this historic fort is well worth a visit.

During its eventful career, the fort was subject to numerous attacks and Mohammed Ghazni, Qutb-ud-din Aibak and Humayun, all invaded this stronghold of the Chandelas. It was Akbar who finally conquered it in 1569 and bequeathed it as a gift to Birbal, one of his “nine jewels”. From Birbal it went to Chhatrasal, the legendary Bundela warrior and them to Hardev Shah of Panna. In 1812 it fell into the hands of the British. This fort with its romantic and extraordinary history is well worth a visit.
The township of Kalinjar was also once enclosed within a high rampart wall with four gateways, only three of which exist today. These are popularly known as the kamta Dwar, Panna Dwar and Rewa Dwar.

The fort is a veritable historical treasure house. Situated at a height of 700 ft. in the Vindhya ranges, this old and massive fort is accessible through seven gateways: the Alamgir Darwaza, Ganesh Dwar, Chandi or Chauburji Darwaza, Buddha Bhadra Dwar, Hanuman Dwar, Lai Darwaza and Bara Darwaza. Within the fort are the remains of two palaces the Raja Mahal and the Rani Mahal, as well as several other places of interest. These include the Sita Sej, a small cave containing a stone bed and pillow once used by hermits, a reservoir known as Patal Ganga, Pandu-Kund, where water trickles from the horizontal crevices of stratified rocks, Buddha-Buddhi Taal, the water of which is believed to possess healing qualities, Bhairav-ki-Jharia or Manduk Bhairav with the colossal figure of Lord Bhairav carved on the rock, the Mrigdhara or Antelope's spring, situated within an inner chamber of the rampart and Koti Tirth pond, an important bathing site, as lepers are believed to be cured by its water.

ccording to mythology, Lord Shiva, after consuming poison that emerged from the churning of ocean, came here and rested for some time. To commemorate the event, Chandela ruler Parmardideva built this temple. A big Shiva linga is installed here. The outer part of the temple has fine carvings. In a niche by the rock-cut Swargarohan Kund, stands a colossal 18-armed, 17 feet broad and 24 feet high image of Lord Kal Bhairav.

Road : Buses and private taxis are available for Kalinjar from Banda, satna and Chitrakoot.