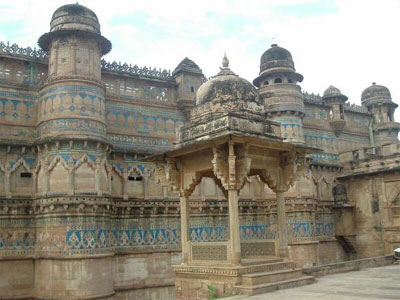 About 142 km from Jhansi, it has been associated with the 1857 uprising against the British. Situated on the bank of the Yamuna river, it is a picturesque town rich in history and monuments. It is one of the eight great forts of the Chandelas.

It is believed to be the place where the great sage Vyas dictated the epic Mahabharat to Lord Ganesh.

It is made of stone and carries the descriptions of Lanka Kand from the Sri Ram Charit Manas in the form of various figurines embossed on the Meenar.

It is built of blocks of rubble set in lime mortar. The dilapidated structure has a lofty dome rising to a height of 60 feet. Its architectural style reveals it to be of Lodhi origin.

Kalpi is also considered by some as the birth place of Ved Vyas, the author of Mahabharata. At the end of 4th century King Vasudeva, a King from Kannauj, founded this city. It is believed to be known as Kalpriyanagari in ancient times. Thousands of years ago it was the center of Hindu culture and Aryan civilization. The Vishnu purana suggests that Shri Vyasa Deva (Krishna Dwaipayana Vyasa) or Ved Vyasa, son of Parashara and Satyavati and composer of Mahabharata was born 5000 years ago in an island on Yamuna at Kalpi.

Shri Ropan Guru was born in 1540 in Unnao District. After enlightenment, he went to forest for prayer. The aim of Guru ji was to remove darkness of the society as stereotype, blind belief, narrow mindedness etc. His Samadhi is located at Kalpi on Jalaunn road, where a big educational institution has come up by an organization in the guru’s memory.

59 km from Jalaun, Rampura was once a small principality under the Kachhwaha Rajputs of Jalaun and their ruler Raja Ram Singh. The fortified palace of Rampura which is about 350 yrs old, is a massive handsome structure, well worth a visit.

9 kms from Rampura, Jagmanpur, once the head quarters of the Sengar Rajput clan under Raja Rup Shah, also houses a large masonry fort. The confluence of five rivers nearby, known as the “Panch Nada” is and added attraction for the tourist.
The two forts can be visited with due permission from the owners.

Road :On National Highway 25, Kalpi is well linket to major towns in the area.