Gypsum (CaSO4‐2H2O) is hydrated calcium sulphate occurring in nature in different forms. It is a common evaporite and fertilisermineral.Occurrence of gypsum has been reported from different parts of Bundelkhand 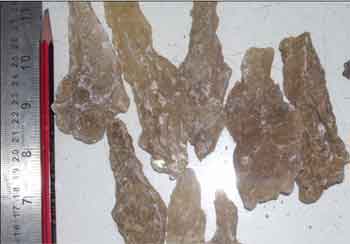 area near villages Gonti, Gokhal, Dhanaura, Parsua, Malehta in Jhansi and Puraini,Parcha in Hamirpur district (Kothiyal, 2002).Gaur (2003) studied the occurrence of gypsum (selenite) from the BandaAlluvium of Quaternary age in the northern fringe of the Bundelkhand Craton near village Gonti and Malehta, in Jhansi District. The area is characterised by shallow soil profile of Banda Alluvium which is developed over the basement of Bundelkhand Granitoid Complex (BGC). Banda Alluvium, in this area, is composed of yellow clay,brown coloured silty sand, sandy silt with kankar, grey silt, light brown sandy silt and light grey silty clay. Gypsum occurs as disseminated, loose and free‐growing crystals in clay beds within the Banda Alluvium, exposed along the right bank of Betwa river. The size of the crystalsrange from less than a mm to more than 10 cms

The bulk soil sample consisting of clay and very small (lessthan 0.5 cm) crystals of gypsum (Photo‐1) from the area was analysed at Chemical Laboratory, GSI, NR, Lucknow and it was found to contain Cao‐11.2%, SO3‐ ‐6.68%, Fe2O3‐4.8% and SiO2‐46.02% indicating about 14% gypsum. The XRD analysis (Min. Physics Division, GSI, NR, Lucknow) shows that the selenite crystals have more than 99% CaSO4.2H2O.
The gypsum is an important fertiliser mineral. The find of gypsum in the area opens a new dimension for the mineral investigation, Quaternary geological‐geo‐environmental studies in the area.