Even States that claim to have impressive economic growth report severe under-nutrition and high infant mortality, particularly among their tribal populations.
(PRASHANT DUBEY) 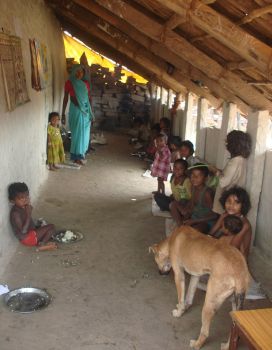 At an anganwadi centre in Satna district in Madhya Pradesh.

What people outside Madhya Pradesh hear of the State is about the Stupas of Sanchi, the ancient heritage of Bhimbhetka and the inspiring love legends of Mandu. What they do not hear is that at 60 per cent, the State ranks first in the proportion of children affected by malnutrition; that at 70 per 1,000 live births, the State has the highest infant mortality rate (IMR) in the country; and that over six lakh children have died in the State in the five-year period from 2005-06 to 2009-10, according to National Family Health Survey (NFHS)-3 and the Sample Registration System (SRS) 2008.

In fact, malnutrition has reached epidemic proportions in the State during the last half decade. According to NFHS-3, over 82 per cent of the children in the State are anaemic. The IMR for the tribal population is 95.6/1000 live births, while the under-five mortality among tribal people is a shocking 140.4/1,000 live births.

Tribal regions have been the worst hit, with governmental apathy and the bureaucracy’s consistent denial aggravating the problem. In fact, denial seems to be the only strategy of the State government against the child hunger epidemic.

Late last year, when 43 children were found to have died over a period of two months in two villages of the tribal-dominated Jhabua district, the district health officials confirmed to this correspondent that the deaths were caused by “severe malnutrition, anaemia and falciparum malaria”.

However, the district administration, in its official reply to the Right to Food Campaign’s State Adviser to the Supreme Court Commissioners after an almost four-month delay, denied that malnutrition was the cause of the deaths. It stated that 16 deaths were because of anaemia, while 12 children died in neighbouring Gujarat and Rajasthan, where the children’s families had migrated for work.

“The situation is very worrying in Jhabua,” Union Women and Child Development Minister Krishna Tirath told Frontline during her visit to the tribal district on March 1. “A lot of children here are severely undernourished and anganwadis don’t open regularly. It is the State government’s job to see why this is happening and see to it that the problem is addressed,” she said.

Chief Minister Shivraj Singh Chauhan told Frontline: “The Central government has reduced the outlay for the social sector in the Union Budget, so I don’t see the point in blaming the State government for anything. Malnutrition is not an isolated issue and needs to be situated in the broader socio-economic context.”

Other tribal-dominated districts, such as Rewa, Sidhi and Satna, too, have poor child health records. While almost 50 per cent of the children in rural Rewa are affected by malnutrition, Sidhi was in the news for the death of 22 children in less than two months last year. Satna, which boasts the State government’s Sick Newborn Care Unit (SNCU), witnessed the death of 117 infants over a period of four months last year.

The non-tribal areas have not fared any better. By the State government’s own admission, 13 per cent of all the child deaths from 2005-06 to 2008-09 were reported from the socially backward Bundelkhand region. Districts in the region show massive increases in child deaths over the four-year period.

While Tikamgarh showed the highest increase of 469 per cent, Sagar and Panna showed increases of 189 per cent and 273 per cent respectively. Further, Sagar and Chhattarpur districts recorded 1,481 and 1,242 deaths respectively over a one-year period in 2008-09.

The State government says it has acknowledged the gravity of the crisis and is making efforts to address it. “We plan to tackle this crisis with our SNCUs, nutrition rehabilitation centres (NRCs) and paediatric intensive care units (PICUs),” says Principal Secretary (Health) S.R. Mohanti.

“We have the highest number of NRCs and SNCUs in the country. Besides, the Chief Minister is soon going to announce a Mukhyamantri Baal Aarogya Mission to address this issue. I expect all this to bring down our IMR by 20/1000 live births at the least,” he says.

The responsibility of ensuring child health and preventing malnutrition rests chiefly with the Health Department and the Women and Child Development (WCD) Department. While the former is concerned with the health aspect, the latter is responsible for ensuring nutrition among infants and children through anganwadi centres.

However, there is a visible lack of coordination between the two departments, with both maintaining conflicting data. For instance, according to the Health Department’s data, 233 infants died in Dhar district over a 45-month period from April 2005 to January 2009. The WCD data for the district, for a shorter period of six months, from November 2007 to May 2008, puts the number of infant deaths at 469.

On March 8, the Health Ministry admitted that 60 per cent of the State’s children were suffering from malnutrition. Three days later, in its written admission in the Assembly, the WCD Ministry brought down this percentage to 43.

The severe mismatch in their figures showed up yet again the absence of coordination between the departments. Practically, it has meant a perpetual blame game and consistent denial and shifting of responsibility.

Interestingly, in their replies to separate Right to Information (RTI) petitions, both departments, in a way, admitted to not maintaining any record of the number of malnutrition-related deaths. While the WCD, in response to a petition filed last year, said it did not maintain any record of malnutrition deaths, the Chief Medical Health Officer of Jhabua district, in his reply to a petition in March, said the department did not have any mechanism to record the infant deaths in the district for the past six months.

What is clear in all this is that the government under-reported child deaths in its official records and seems to have made non-registration or improper registration of child deaths an important face-saving strategy.

This could only mean two things: either the IMR calculated by the SRS is incorrect or there has been large-scale under-reporting of child deaths.

“The IMR is correct and we accept it as a standard. It is obvious that there is massive under-reporting of child deaths at the district level,” said a senior health official who did not want to be named.

Experts in the State believe that there is a need to analyse malnutrition from a standpoint beyond the governmental perception of a health emergency.

“More than a health emergency, malnutrition is a food insecurity issue and needs to be addressed from that perspective,” says Sachin Jain, The Right to Food Adviser to the Supreme Court Commissioners from the State.

“In Madhya Pradesh, the average consumption of food items is around 9.1 kg a person a month, which is much lower than the required quantity of 13.5 kg. Displacement, eviction, land diversion, distress and migration are the larger issues of development policies, but they contribute to a rise in malnutrition in different ways and it shows in the fact that 72 per cent of the tribal children in Madhya Pradesh are undernourished,” he says.

The implementation of the National Rural Employment Guarantee Scheme (NREGS), though not related directly to malnutrition, has pretty definitive consequences for child health in the event of families being forced to leave their villages in search of livelihood opportunities. Although Madhya Pradesh ranks high in the spending of NREGS funds, field visits paint a grim picture of large-scale distress migration in several districts, including Chhattarpur, Tikamgarh (part of the Bundelkhand region) and Jhabua.

An independent study conducted by the Delhi-based Centre for Environment and Food Security points to massive corruption in the NREGS apparatus, including inflated project costs and use of heavy machinery in at least five districts – Jhabua, Chhattarpur, Tikamgarh, Dhar and Shivpuri.

According to the study, Jhabua, which is a high-mortality zone, received only 11.51 days of employment on an average and only 0.48 per cent of sample households received employment for 100 days. Loss of traditional livelihood and the failure of the NREGS as an alternative have had disastrous effects on food security among families in the district.

In the Jhabua case (43 child deaths), the administration stated in its reply that migration was an inherent tendency of the people of the district as they received better wages in Gujarat and Rajasthan. It, however, appears doubtful that 12 children, from just two villages, suddenly died during their two-and-a-half-month migratory stay in Gujarat and Rajasthan – more so, if, by the administration’s own admission, migration provided better opportunities to people. What it does point to, however, is the failure of the NREGS in providing livelihood and curbing distress migration in the district.

Displacement, especially of tribal communities from their traditional forest dwellings, is another issue that has affected food security. Madhya Pradesh has performed badly in the implementation of The Scheduled Tribes and Other Traditional Forest Dwellers (Recognition of Forest Rights) Act, 2006, which has meant loss of control of traditional forest-dwelling communities over minor forest produce and other forest resources. For instance, malnutrition is a major problem among the people of the Sahariya tribe displaced by the formation of the Kuno Palpur sanctuary. The sanctuary, meant for the translocation of the Asiatic lion from Gujarat, displaced people in 25 villages from their traditional habitat. Post-resettlement, however, the going has not been very good for this primitive tribal group.

“Inside the sanctuary, we had around 30 bighas and a lot of cattle. We could get berries and other forest produce. Plus, there was milk from the cattle. Our children were never hungry and weak in there,” says Ramniwas of Barred, one of the villages that were evacuated.

The ineffectiveness of the Public Distribution System (PDS) in tackling the hunger crisis in the State is now a matter of record. In January 2008, in PUCL vs Union of India, the Supreme Court passed an order stating that all below poverty line (BPL) families must receive 35 kg of foodgrains a family a month. However, the State government has been able to provide only 20 kg of grain to these families. The government argues that against the over 62 lakh BPL families, the Centre recognises only 41 lakh and allocates grain on that basis, which forces the State government to distribute a reduced amount to these families.

In a response to a PIL petition filed by Rolly Shivhare, a Right to Food activist, the government told the Madhya Pradesh High Court that foodgrains procured by it were deposited in the Central pool and the State could not draw grains from the pool without the appropriate allotment issued by the Centre. The government further reasoned that if the Union of India allotted foodgrains according to the BPL family figures provided by the State, it would start supplying 35 kg foodgrains immediately to all such families.

While there seems to be no sign of any immediate resolution of this issue, it has meant rising food insecurity for the over six million poor families in the State.